Vietnam and France will work together to seek solutions to step up projects regarding defence equipment while seeking new cooperation opportunities. 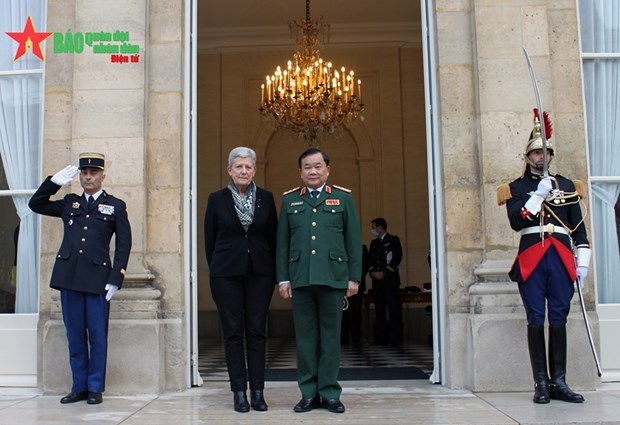 Vietnam and France will work together to seek solutions to step up projects regarding defence equipment while seeking new cooperation opportunities.

The consensus was reached during the talks between Vietnamese Deputy Minister of National Defence Sen. Lieut. Gen. Hoang Xuan Chien and French Minister Delegate for Remembrance and Veterans Geneviève Darrieussecq, attached to the Minister for the Armed Forces. The talks took place within the framework of Prime Minister Pham Minh Chinh’s freshly-ended official visit to France.

The two sides noted with pleasure development steps of the Vietnam-France strategic partnership and mutual support at multilateral forums.

They agreed to coordinate in organising the second Vietnam-France defence strategic and cooperation dialogue, thus contributing to fostering mutual understanding and creating a foundation for the bilateral defence ties.

Chien said Vietnam treasures France’s role as a permanent member of the United Nations Security Council (UNSC), and a member of the European Union (EU) and many other international organisations.

He called for France’s further support to Vietnam, helping the Southeast Asian country complete its role as a non-permanent member of the UNSC for 2020-2021, and strengthen its collaboration with the EU, especially in 2022 when France holds the rotating EU Presidency.

Vietnam backs France’s efforts to contribute to maintaining peace, stability and cooperation for development in the region, Chien said, pledging that Vietnam stands ready to work as a bridge between the Association of Southeast Asian Nations (ASEAN) and France.

The Deputy Minister expressed his hope that France will uphold its role and position in the region, for peace and stability on the basis of respect for international law.

Chien and Darrieussecq witnessed the signing of a letter of intent between the Vietnamese Ministry of National Defence and the French Ministry of Armed Forces on military medical cooperation./.