Experts said a law on bad debt settlement should be put in place before two regulations expire in six months. 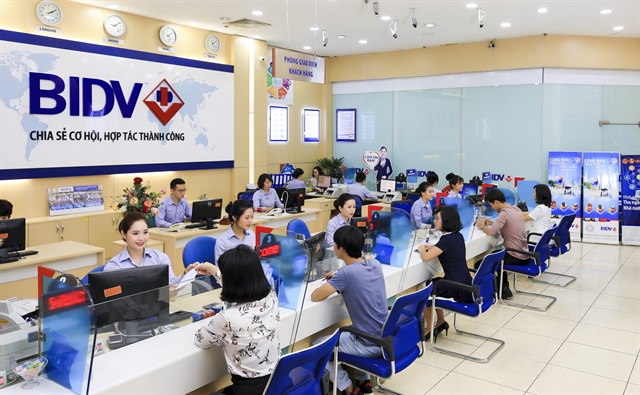 Clients conducting bank transactions at BIDV. Thanks to the bad debt resolution, the bank has been settling bad debts at an average rate of about VNĐ25 trillion ($1.1 billion) per year. — Photo vietnamplus.vn

Experts said a law on bad debt settlement should be put in place before two regulations expire in six months.

Cấn Văn Lực, chief economist at BIDV, is concerned that Circular No.14 and Resolution No.42, which regulate bad debts in the banking system, will soon expire.

He believes a law on bad debt settlement should be introduced to fill the legal gap left by their expiration, or unregulated bad debts will pile up, destablising the economy.

“Bad debts are expected to soar in the second half of 2022 and continue to rise faster in the following years unless a legal mechanism for bad debt settlement is set up in time,” Lực said.

Without such a mechanism, the bad debt ratio will climb to 2.3 to 2.5 per cent this year and rise higher from 2024.

The economist proposed a two-step plan to facilitate the rollout of such a law.

First, it is necessary to extend the resolution for three more years to have enough time to prepare for a draft.

Second, lawmakers formulate the law in line with international practices and, simultaneously, make it suitable for the banking system.

In the meantime, amendments to the resolution should also be made to address its shortcomings, which include the absence of a formal debt trading market, difficulties in debt and collateral valuation, and issues related to the seizure of collateral.

Hoàng Văn Cường, a National Assembly deputy, said that the Resolution No.42 had helped banks settle bad debts at a faster pace.

With the resolution, bad debts in the banking system were handled at an average rate of VNĐ7.15 trillion (US$313.6 million) per month, much higher than the rate of VNĐ3.63 trillion per month previously.

However, he underlined the nature of the resolution, which is just a pilot legal document of five years, pointing to its shortcomings and stressed the need for a more comprehensive law on bad debt settlement.

“Resolution No.42 remains in effect over just five years. Many debtors take advantage of such a short duration to circumvent the resolution,” he said.

Nguyễn Quốc Hùng, general secretary of Việt Nam Banks Association, acknowledged that the Resolution No.42 had stepped up the settlement of bad debts for nearly five years.

Nevertheless, he said that there still existed some shortcomings in the resolution that render it inapplicable in many cases.

The secretary called for amendments to the resolution to address the shortcomings and develop the resolution into a full-fledged law that moves the bad debt settlement process faster.

Trương Thanh Đức, a lawyer at ANVI Law Firm, revealed that the Resolution No.42 was due to expire in mid-August, 2022.

He believes the expiration will cause additional problems to the banking system, which was facing mounting bad debts during the pandemic.

Accordingly, a law on bad debt settlement is considered necessary to enable banks to continue resolving bad debts at a fast rate.

In that case, it is recommended to extend the resolution for at least 5-10 years, until legal cases related to bad debts could be quickly and effectively resolved in courts of law.

By late 2021, the banking system has managed to settle over VNĐ1.3 quadrillion ($57 billion) of bad debts, of which VNĐ369.9 trillion are bad debts under the Resolution No.42.

National Assembly member: exports have increased strongly but depend on FDI

VCN - Delegate Nguyen Duy Minh (Danang) suggested that the Government pay more attention to the strong increase in exports, but the contribution of the FDI sector is still the largest in the trade structure of Vietnam.

Worries about potential bad debt in the future

VCN - By the end of the first quarter of 2022, the bad debt ratio at many banks has tended to increase, while many forecasts have raised concerns that this problem will increase when the potential bad debt and bad debt from the restructured debt will disclose in the last months of 2022.

Credit institutions must declare and pay taxes before collateral settlement

VCN - If the taxpayer has not declared and paid enough tax to the customs authority, the credit institution must declare and fully pay tax, before collateral settlement.