VCN - In order for Ho Chi Minh City to return to its leading position as the locomotive of economic growth in the southern region and the whole country, in 2022, the city needs to focus on solving four key tasks.

Economy fired on all cylinders thanks to Resolution 128

According to Chairman of the Ho Chi Minh City People's Committee Phan Van Mai, the city's economy in 2021 underwent a difficult period when the world economic growth momentum and global trade was threatened by the impact of the fourth wave of the Covid-19 pandemic.

In particular, supply chains and production links were disrupted due to traffic congestion and labor shortages, while escalating energy and raw material prices have put great pressure on inflation.

As announced by the Ho Chi Minh City Statistics Department, regarding the socio-economic situation of Ho Chi Minh City in the whole of 2021, the city’s gross domestic product (GRDP) is estimated at approximately VND1,299 quadrillion (at current prices), down 6.78 % compared to the same period last year. This is considered the deepest decline in history, while the average CPI in 2021 increased by 2.36% over the same period last year.

According to the People's Committee of Ho Chi Minh City, the economy of Ho Chi Minh City recovered most clearly thanks to the implementation of Resolution 128 of the Government on safe, flexible adaptation and effective disease control.

After nearly two months implementing Resolution 128 of the Government, the pandemic situation in Ho Chi Minh City has been brought basically under control. In particular, the socio-economic situation began to prosper again with many bright spots, such as total state budget revenue reached over VND381,531 billion, exceeding nearly 4.6% of the estimate, an increase of nearly 3% compared to the same period last year.

In addition, many production and business industries and fields that are capable of digital transformation, in line with the "new normal" state, still maintained a stable growth rate such as information and communication, finance, banking and insurance, professional services, science and technology, education and training, health and social relief increased by 6.08%; 8.16%, 3.8%, 3.12%, 28.68%, respectively.

It is forecast that in 2022, the city's economy will recover in a V-shape and it is obvious that the world economy still has to deal with the new strain of Covid-19 and potential geopolitical uncertainties.

In order for the city to return to its position and role as the locomotive of economic growth in the southern region and the whole country, Ho Chi Minh City needs to focus on solving four key tasks.

Firstly, pandemic prevention and control measures under the direction of the National Steering Committee for Disease Prevention and Control must be strictly implemented such as raising awareness of prevention; selective isolation, flexibility, adaptation to the new normal; improving testing capacity at airports and port border gates along with Covid-19 treatment capacity, vaccination capacity at state and private health facilities. Determining that early and adequate vaccination for people is a condition for economic recovery.

Third, focus on handling bottlenecks on land; resolve legal conflicts over procedures for land allocation, determination of compensation unit prices, payment and settlement procedures for capital construction to speed up the disbursement of public investment capital.

In the immediate future, priority should be given to removing difficulties for slow-disbursed projects, especially key, large-scale projects to improve production capacity for the economy. Fourth, promote the application of information and communication technology in all administrative activities of State agencies, especially those performing public administrative services and consider this an urgent task in E-government construction to serve the people, thereby changing management thinking and management methods in society.

Take advantage of the opportunity to speed up the digitization of data in all agencies, especially residential and business data. Encourage the establishment of new businesses in the fields of electronics, information technology, finance, education and health.

VCN - In the first months of 2022, Ho Chi Minh City's economy recorded many positive signs of recovery, in which, the flourishing export growth will create a boon for HCMC's economy.

VCN - After being severely affected by the Covid-19 pandemic, HCM City has recovered and prospered, and many economic indicators of the city have achieved positive growth.

VCN - Enterprises all highly appreciate the trend of improving the business environment in localities, thanks to innovative methods employed for the benefit of the business community. 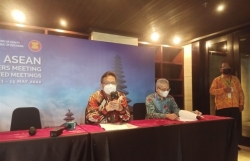