Việt Nam’snbsp;export turnovernbsp;of fiber of all types reached a record high of US$5.6 billion in 2021, despite the severe impact of the COVID-19 pandemic, data of the General Department of Việt Nam Customs showed. 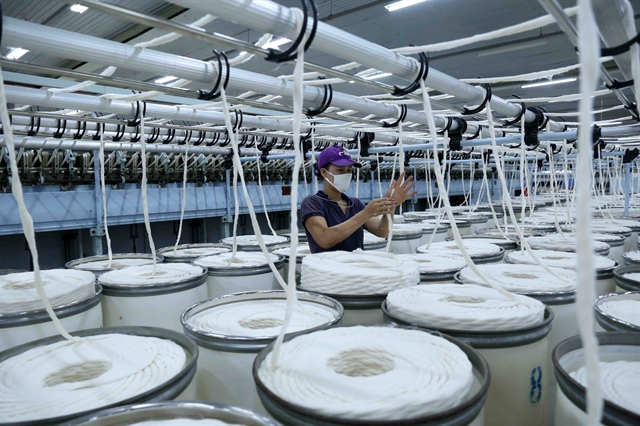 HÀ NỘI — Việt Nam’s export turnover of fiber of all types reached a record high of US$5.6 billion in 2021, despite the severe impact of the COVID-19 pandemic, data of the General Department of Việt Nam Customs showed.

Last year, the price of fiber rose by 25 per cent compared to 2020. Of these, cotton experienced the highest growth, followed by polyviscose and polycotton. Many enterprises including the Hà Nội Textile and Garment Joint Stock Corporation (Hanosimex) have benefited from the fiber price hike.

Despite the outbreak of the pandemic last year, Hanosimex’s subsidiaries still operated at full capacity. The corporation attributed it to the fact that they had received orders early and had been proactive in securing materials for their production.

Thanks to a rise in fiber price and good trading, the corporation’s revenue was estimated to reach VNĐ897 billion ($39.5 million) last year, representing 146 per cent of the year’s target. It earned VNĐ675 million from exporting fiber, doubling that of 2020. The profit of Hanoisimex was VNĐ86.3 billion last year, seven times higher than the target of VNĐ12 billion, the Đầu Tư (Investment) newspaper reported.

According to Nguyễn Ngọc Bình from the Việt Nam National Textile and Garment Group (Vinatex)’s production and business department, enterprises in the fiber industry have gained impressive achievements in terms of production, business and exports.

He said that more than 50 per cent of Vinatex’s profit came from the industry in 2021.

A Vinatex’s report showed that the corporation recorded more than VNĐ16.4 trillion in revenue last year, up 10 per cent compared to the previous year and pre-tax profit doubling year-on-year to VNĐ1.2 trillion.

The corporation has recovered to the same level as before the pandemic. This resulted from an investment strategy on materials that has been carried out over the last five years, Bình said, adding that despite the COVID-19 pandemic, two modern factories were put into operation by Vinatex in 2021 to meet the fiber demand for 2022.

With the resumption of production and supply chains as well as safe adaptation to COVID-19 pandemic measures, enterprises engaged in fiber manufacturing and exporting have enjoyed advantages at the beginning of this year.

Major companies, namely Sợi Thế Kỷ, Thiên Nam and Phú Bài, announced that they are fully booked for the first quarter and some customers like China and the Republic of Korea have pledged to maintain orders from Vietnamese suppliers in the long term.

Hồ Lê Hùng, director general of Hanosimex, said that the corporation will tap the market opportunity in the first months of 2022 to contribute to 50 per cent of the estimated profit of VNĐ70 billion. — VNS

VCN – Quang Ninh Customs Department has effectively and quickly cleared goods amid the complicated development of Covid-19 to restore imports and exports on land routes.

VCN - Since the normalization and establishment of diplomatic relations (July 12, 1995), trade activities between Vietnam and the United States have grown significantly, which is a bright spot in the cooperation relationship between the two countries.