The opportunities are plentiful for countries to move up the global value chain, said Riccardo Crescenzi, Professor of Economic Geography at London School of Economics, at a press conference announcing the report “Climbing up global value chains: Leveraging FDI for economic development” this week. 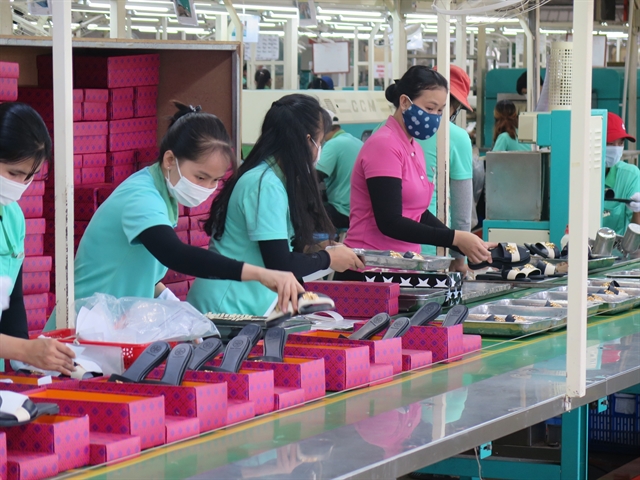 Footwear are made at Victory International Co in the southern province of Long An. — VNA/VNS Photo Minh Hưng

Việt Nam, like many other East and Southeast Asian countries, is further climbing up the global value chain (GVC) thanks to the positive effect of the utilisation of foreign direct investment (FDI), according to the latest report by Hinrich Foundation.

The opportunities are plentiful for countries to move up the global value chain, said Riccardo Crescenzi, Professor of Economic Geography at London School of Economics, at a press conference announcing the report “Climbing up global value chains: Leveraging FDI for economic development” this week.

Việt Nam’s increasing openness leads to a rise in FDI stock as a percentage of GDP, the report said.

“One useful change was the revision of the Law on Investment Policy, which restricted the ability of the central and subnational government to issue regulations on investment. This change removed uncertainty and overlapping or contradictory legislation.

“Việt Nam’s economic model remaining led by FDI but focused on final-stage assembly tasks that depend on imports,” it added.

Crescenzi stressed it is important that the Government and enterprises understand exportation activities, from goods to sources of investment to build domestic capacity and create domestic value-added.

Some 68 per cent of global FDI flows landed in Asia-Pacific Economic Cooperation (APEC) economies in 2020, compared to less than 50 per cent 10 years ago, said Akhmad Bayhaqi, Senior Analyst at APEC Policy Support Unit.

East and Southeast Asian countries, which make up half of the APEC economies, play a critical role in GVC, he noted, adding that the regions have attracted 18.4 per cent of the global FDI and served as the “world’s factory” for more than two decades.

Countries holding central positions in the FDI network are also hubs in the global trade network, he said, and it seems that participating in the GVC helps many emerging economies lure investment.

Without creativeness, Việt Nam will not be able to improve productivity and struggle to compete, he continued, adding the formula for victory in a global competition is being creative. — VNS

VCN - On August 11, at a forum entitled "Vietnam's Industrial Zones 2022: Opening up new investment capital flows", experts came up with many solutions to improve foreign investment cooperation (FDI) in industrial zones (IZs) in Vietnam in the future.