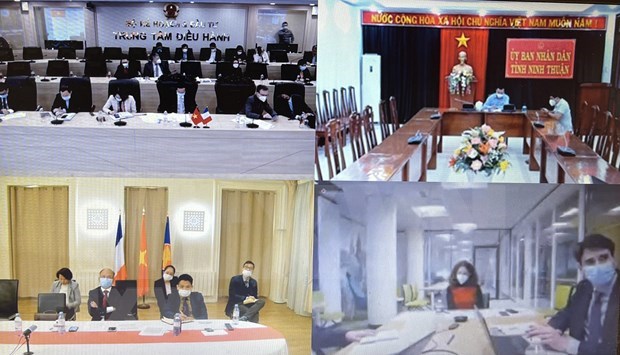 The seventh high-level economic dialogue between Vietnam and France takes place in the form of videoconference on January 20. (Photo: VNA)

The event was co-chaired by Director of the External Economic Department under the Ministry of Planning and Investment Pham Hoang Mai, and on the French side head of the Bilateral Affairs and International Business Development Department at the French Treasury Magali Cesana.

In opening the dialogue, Director Pham Hoang Mai thanked the French Government and people for aiding Vietnam with vaccine and medical supplies in the battle against COVID-19, which he said reflect the close ties between the two countries.

For her part, Cesana affirmed that despite the negative impacts of the pandemic, cooperation with Vietnam is still among priorities of France. She cited the official visit to France by Prime Minister Pham Minh Chinh, saying that it demonstrates France’s commitment to enhancing investment, economic and trade cooperation with Vietnam.

The two sides took note of achievements in bilateral economic ties, including France’s cumulative investment worth a total 3.6 billion USD in Vietnam by the end of 2021, ranking third among EU investors in the country.

They agreed that opportunities brought about by the EU-Vietnam Free Trade Agreement will promote Vietnam-France partnership in such fields as transport, energy transformation, aviation, agriculture, food industry and sustainable development, while further facilitate market access for their enterprises.

The two sides exchanged notes on bilateral programmes and projects funded by French ODA, particularly the urban railway No.3 in Hanoi, which is considered a symbol of Vietnam-France ties and expected to be put into operation at the end of this year.

They also discussed in details possibilities for cooperation in agriculture and transport, the Long Thanh airport project and a scheme on forming an international farm produce wholesale market.
The Vietnamese side took the occasion to inform the French side on Vietnam’s socio-economic development in 2021 and the five-year plan for 2021-2025./.

Greek President arrives in Hanoi for official visit to Vietnam

Greek President Katerina Sakellaropoulou and a high-ranking delegation of Greece arrived in Hanoi on May 15 afternoon, beginning their four-day official visit to Vietnam at the invitation of President Nguyen Xuan Phuc.