UKVFTA - a boost to Vietnam-UK trade

After the UK-Vietnam Free Trade Agreement (UKVFTA) took effect on December 31, 2020, both sides saw impressive growth in their two-way trade though exports faced formidable challenges caused by the COVID-19 pandemic. 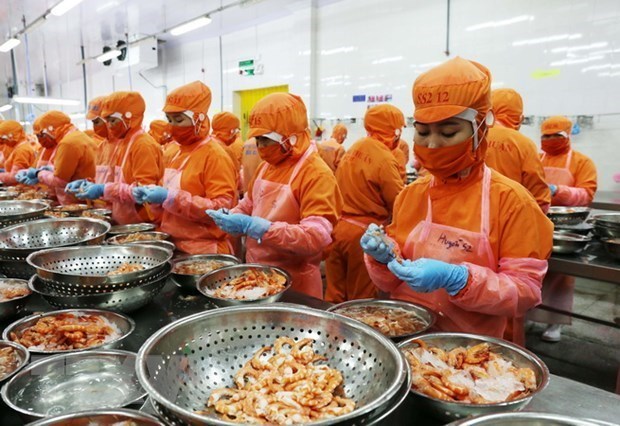 Shrimp processed for export to the UK (Photo: VNA)


After the UK-Vietnam Free Trade Agreement (UKVFTA) took effect on December 31, 2020, both sides saw impressive growth in their two-way trade though exports faced formidable challenges caused by the COVID-19 pandemic.

Statistics from the General Department of Vietnam Customs showed that total trade in goods between the two nations topped 657.35 million USD in January, a year-on-year hike of 78.57 percent. The Ministry of Industry and Trade described it as an impressive growth, particularly in the context of COVID-19.

Experts said a wide range of Vietnamese fruits like lychee, longan, dragon fruit, pineapple and rambutan will hold more advantages to access the UK market over those from Brazil, Thailand and Malaysia who have not clinched a FTA with the European country.

Meanwhile, Vietnam spent 59.297 million USD on imports from the UK, up 34.3 percent year-on-year.

As of December 2020, the UK registered 3.84 billion USD in 411 projects in Vietnam, becoming the 15th biggest investor among 139 countries and territories landing investment in the nation. Most of the UK’s projects were in finance, banking, oil and renewable energy.

The Ministry of Industry and Trade affirmed that the trade pact will boost trade growth between the two nations in the coming time thanks to its commitment to erasing 65 percent of the total tariffs immediately after the pact took effect, and 99 percent of the tariffs in six or seven years./.

Hà Nội applies IT to enhance value of agricultural products