Chairman of the National Assembly (NA) Vuong Dinh Hue met with Lao Prime Minister Phankham Viphavanh, who is on an official visit to Vietnam, in Hanoi on January 8.

Chairman of the National Assembly (NA) Vuong Dinh Hue met with Lao Prime Minister Phankham Viphavanh, who is on an official visit to Vietnam, in Hanoi on January 8.

The Lao PM spoke highly of the achievements that the Vietnamese Party, State, and people have obtained recently, voicing his belief that under the Communist Party of Vietnam’s leadership, the Vietnamese people will successfully carry out the resolution of the 13th National Party Congress and the socio-economic development strategy for 2021 - 2030, and unceasingly raise the country’s role and stature in the region and the world.

Both host and guest affirmed that the Parties, Governments, parliaments, and peoples of their countries always attach importance and give the top priority to maintaining the unique relationship between Vietnam and Laos.

They noted with satisfaction that despite impacts of the COVID-19 pandemic, bilateral cooperation has still been developing via all channels and in all fields. They also applauded the close cooperation between specialised committees of the Vietnamese and Lao parliaments in organising workshops and sharing lawmaking experience. 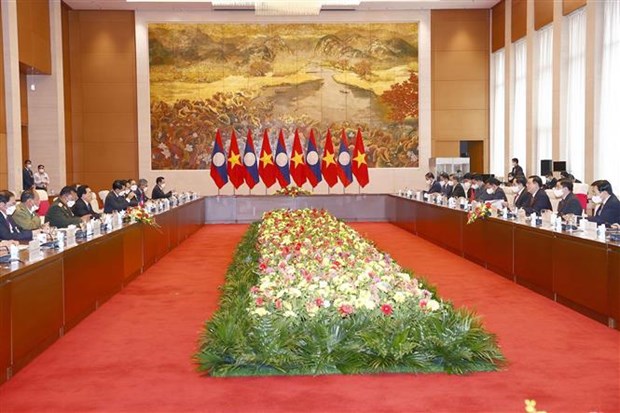 The leaders shared the view that the two parliaments need to keep coordination to monitor and facilitate the effective implementation of their countries’ agreements, while further increasing consultation and sharing experience in legislative affairs so as to help fuel post-pandemic socio-economic recovery and development.

Chairman Hue said the Vietnamese NA has been working to tackle every legal and institutional difficulty and arrange resources for accelerating joint projects, especially the transport infrastructure ones connecting the two countries and linking Laos with Vietnam's seaports, thereby helping connect Laos to the sea and turn it into a regional integration connectivity centre.

The two sides also agreed to continue close coordination and mutual support in their parliaments’ activities, particularly at regional and international parliamentary forums./.

The official visit to Laos by Prime Minister Pham Minh Chinh is a success, contributing to realising diplomatic policy set by the 13th National Party Congress which advocates valuing the development of ties with neighbouring and ASEAN countries, with the top priority given to Laos, said Minister of Foreign Affairs Bui Thanh Son.

An international conference on the strengthening of regional connectivity and development of the East-West logistics corridors was held in Vientiane on November 4, drawing representatives from a number of ministries and agencies of Vietnam and Laos as well as logistics associations, experts and more than 80 enterprises from different countries.

National Assembly (NA) Chairman Vuong Dinh Hue stressed the importance of maintaining macro-economic stability to strengthen the resilience of the economy while delivering a closing remark at the 2022 Socio-Economic Forum in Hanoi on September 18.