President Nguyen Xuan Phuc on December 5 received representatives of large enterprises of the Republic of Korea (RoK) operating in Vietnam, as part of his State visit to the Northeast Asian country. 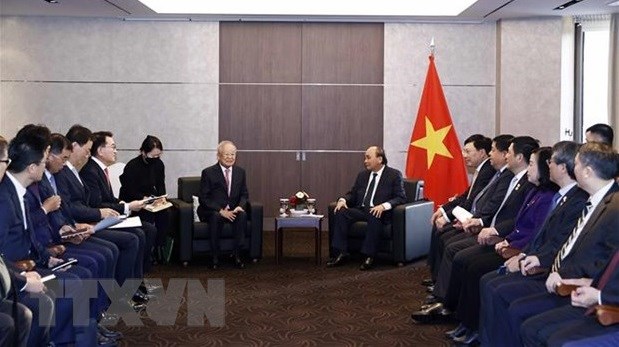 President Nguyen Xuan Phuc on December 5 received representatives of large enterprises of the Republic of Korea (RoK) operating in Vietnam, as part of his State visit to the Northeast Asian country.

Meeting with Chairman and CEO of CJ Group Sohn Kyung-shik in Seoul, President Phuc highly valued the firm’s realisation of its investment commitments in the fields of food and animal feed production, biotechnology, logistics, and culture in Vietnam. It currently has 24 subsidiaries operating in eight main sectors in Vietnam, earning 1.5 billion USD in revenue, rising 10-fold over the last 10 years.

He asked CJ to continue expanding investment in Vietnam, turn the country into its global production and business centre, move its Southeast Asia headquarters to Vietnam so as to optimise opportunities generated by the free trade agreements (FTAs) to which Vietnam is a party, and actively distribute Vietnamese goods to global markets.

Sohn noted over the past years, his group has implemented the commitments on clean food production and biotechnology, turning Vietnam into the third largest among its 30 markets around the world.

In the time ahead, the country will become the production and business centre of CJ in Southeast Asia, he added.

Talking to Chairman of Lotte Group Shin Dong-bin, President Phuc affirmed that Vietnam always creates conditions for this enterprise to increase its presence and continue operating successfully in Vietnam.

He asked the group to consider investing in a modern trade centre and residential area in Long An province, adding that agencies and localities of Vietnam will coordinate with Lotte to ensure harmonious interests between the two sides. 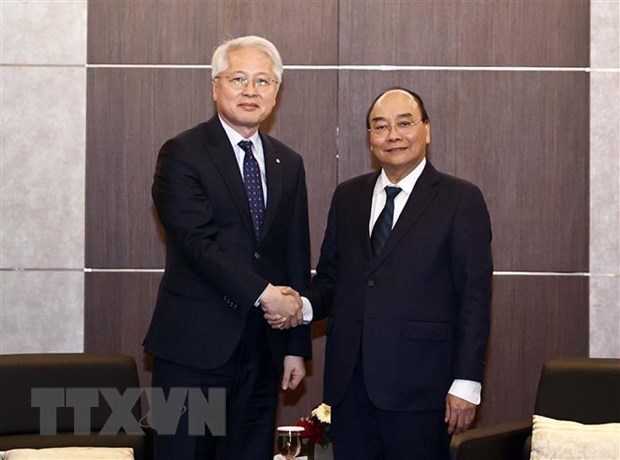 At the meeting with Vice Chairman and CEO of LG Corp. Kwon Bong-seok, President Phuc applauded the group’s strong investment in Vietnam and creation of jobs for tens of thousands of workers in the country.

The State leader expressed his hope that LG will increase investment in Vietnam, especially in the areas it is strong at like automobile and mobile phone components, strengthen cooperation in IT and software training, and place its biggest manufacturing centre in Vietnam.

The country will provide the best investment environment and infrastructure for investors, he affirmed.

Kwon said LG, present in Vietnam since 1995, has invested 5.3 billion USD in multiple fields so far, including camera, electronics, household appliance, and auto component production, and it is planning to pour another 4 billion USD into the country.

It hopes to continue investment cooperation in various areas in Vietnam and develop the country into its centre for manufacturing smartphone cameras in the future, he stated.

Receiving Chairman of Daewoo E&C Jung Won-ju, President Phuc spoke highly of the group’s strong investment in Vietnam, which he described as an appropriate move amid flourishing relations between the two countries.

He asked Daewoo E&C to build a big hospital in Vietnam, which has a population of 100 million with high demand for medical examination and treatment, and invest in the development of infrastructure, oil and gas, smart cities, and services for the RoK’s investment ecosystem in the Southeast Asian country.

Jung noted his firm wishes to invest more in Vietnam, particularly in oil and gas, green growth, environment, and community development, adding that it is about to hold a Vietnam - RoK investment cooperation forum in mid-December so as to enhance partnerships between leading enterprises of the two countries.

Meeting CEO of Hyundai Motor Chang Jae-hoon, the Vietnamese leader lauded its successful investment in the country and called on the firm to keep working with businesses of Vietnam to invest in supporting industries, especially automobile spare part production. 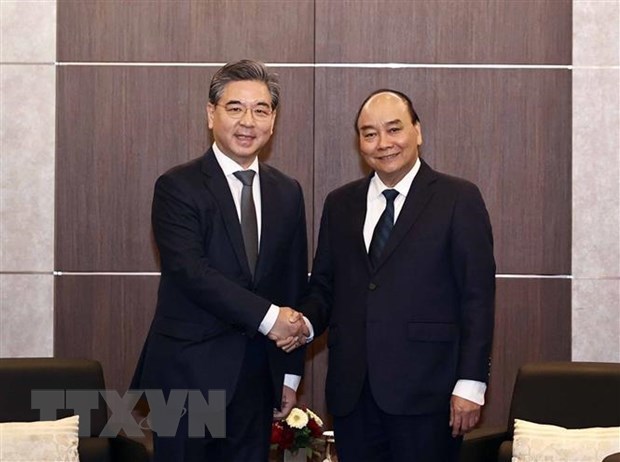 He welcomed its investment in electric vehicle manufacturing in Vietnam, saying that he will assign ministries and sectors to consider tax and infrastructure support policies and encourage the use of e-vehicles in the country. The President also called on Hyundai Motor to make strong investment to turn Vietnam into its regional and global centre in the auto industry.

Chang expressed the firm’s intention to expand investment in e-vehicle production to serve not only the Vietnamese market but also Asia.

Vice Chairman and CEO of GS E&C Lim Byeong-yong informed the leader of some important projects his company is implementing in Vietnam, noting that it is working hard to carry out some new residential areas in Vietnam and develop a system of international schools to improve educational infrastructure in the south of Ho Chi Minh City.

Talking to President and CEO of Doosan Heavy Yeonin Jung, President Phuc highly valued the enterprises’ manufacturing of heavy-duty equipment in Vietnam and asked it to join the country in creating green and clean energy solutions and realising the sutainable development goals.

Vietnam welcomes Korean businesses, including Doosan, stepping up renewable energy development in the country, he added.

Jung said his firm is shifting its investment from coal-fired thermal power to renewable energy to produce electricity. It is applying the RoK’s advanced wind power model to Vietnam, cooperating with Vietnamese partners to develop green energy sources, and sharing experience with the Vietnamese side so as to obtain the best interests together.

The coming visit to Singapore by Vietnamese Prime Minister Pham Minh Chinh will be a key platform for both countries to reaffirm their excellent ties, said Singaporean Foreign Minister Vivian Balakrishnan in his written interview with the Vietnam News Agency.

Vietnam’s e-commerce is projected to continue booming in 2023 and developing firmly in the following years, aided by a series of growth drivers such as the wave of digital transformation, consumers’ trust, technological infrastructure, and favourable mechanisms and policies issued by the Government.

Two-way trade revenue between Vietnam and Laos in 2022 grew 24% from the previous year to reach some 1.7 billion USD, beyond expectations of their leaders at the 44th meeting of the Vietnam – Laos Inter-Governmental Committee on Bilateral Cooperation earlier last year.