Preliminary assessment of Vietnam international merchandise trade performance in the first half of March, 2022

Vietnam‘s trade-in-goods from January to the first half of March of 2022 totaled US dollars 140.05 billion in value terms. It posted a growth of 14.3% (equivalent to USD 17.48 billion) from the same period of previous year. In which, the total merchandise exports value was up 12.2% to nearly US dollars 69.78 billion and the total merchandise imports value was up 16.4%, to US dollars 70.3 billion.

In the view of FDI traders, the value of exportation and importation from January to the first half of March of 2022 reached USD 97.45 billion, up by 11.8% as compared to the same period of last year. 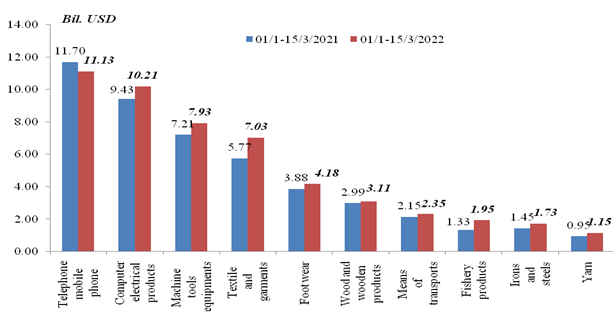 VCN – The customs sector handled 546 violation cases of customs law with the infringing goods worth VND196 billion in January 2023, reported the General Department of Customs on February 1.