Prime Minister Nguyen Xuan Phuc has praised the efforts of the PM’s Working Group in implementing the operational orientations of the Government. 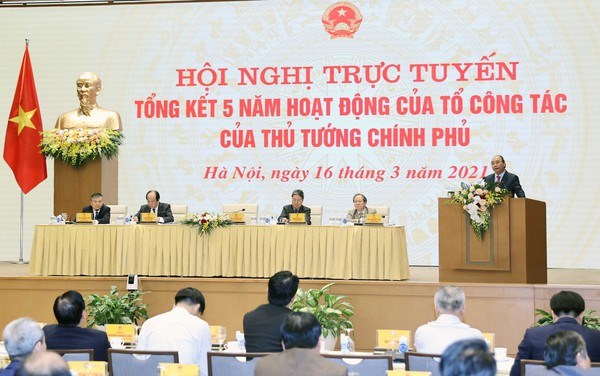 Prime Minister Nguyen Xuan Phuc has praised the efforts of the PM’s Working Group in implementing the operational orientations of the Government.

Chairing a meeting to review the group’s performance over the last five years, the PM said it made positive contributions to the success of the Government and his own activities throughout the tenure.

Formed in August 2016 for the first time, the Working Group is responsible for examining and monitoring the implementation of tasks that the Government and the PM assign to ministries, agencies, and localities, and reporting the results to the PM at regular cabinet meetings.

Over the last five years, the group has focused on supervising the completion of institutions, the reform of professional inspection activities and the simplification of business conditions, the implementation of growth targets, the removal of obstacles facing people and businesses, the building of e-government and administrative reform.

The PM underlined that the formation of the Working Group helped tackle problems in administration, thus facilitating production and business.

Following the initiative, many ministries, sectors, and localities have set up their own working groups to make sure that their tasks are thoroughly realised, thus removing obstacles in mechanisms and policies for people and businesses and helping win their confidence, he noted.

In early 2016, before the Working Group was founded, overdue tasks accounted for over 25 percent of total missions, but this had been brought down to only 1.8 percent by late 2020.

It is necessary in the future for ministries, sectors, localities, and the Working Group to focus on completing institutions and legal mechanisms, while identifying existing problems and seeking timely solutions, he said./.

First Secretary of the Communist Party of Cuba (CPC) Central Committee and President of Cuba Miguel Díaz Canel chaired an official welcome ceremony for President Nguyen Xuan Phuc and the Vietnamese delegation at the Palace of the Revolution in Havana on September 19 evening (local time).