Party General Secretary Nguyen Phu Trong lauded efforts and achievements made by the banking sector during the national cause of economic development as he delivered a speech at a ceremony marking the sector’s 70th founding anniversary (May 6). 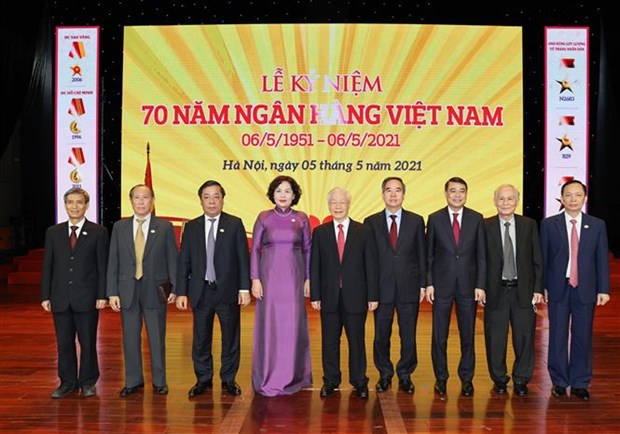 
Party General Secretary Nguyen Phu Trong lauded efforts and achievements made by the banking sector during the national cause of economic development as he delivered a speech at a ceremony marking the sector’s 70th founding anniversary (May 6).

Describing the sector as the lifeblood of the economy, he hoped it to continue contributing to the nation’s reform, industrialisation and modernisation.

The Party leader recommended the sector enhance the efficiency of the State Bank of Vietnam (SBV)’s management and monetary policy, while ensuring the security, safety, and effectiveness of credit organisations’ operations.

The sector should keep up its efforts to control inflation, stabilise the macroeconomy, mobilise and meet demand for credit, and offer banking services serving socio-economic growth, Trong said. 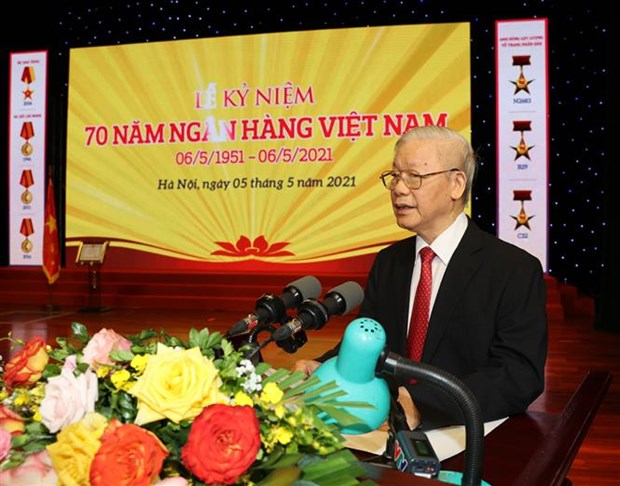 
At the event held on May 5, State Bank Governor Nguyen Thi Hong underscored the SBV will closely follow orientations and policies issued under the 13th Nation Party Congress’s Resolution in directing and managing banking activities in contribution to realizing targets set in the 2021 – 2025 plan and 2021 – 2030 strategy for socio-economic development as well as the vision toward 2045.

The SBV will boost the effectiveness of its monetary policy monitoring and its capacity to adapt to domestic and global economic fluctuations so as to realize the goals of inflation control, stable macroeconomics, helping enhance the economy’s independence and autonomy amid international integration, she noted.

Restructuring, completing legal frameworks, persifying services, and promoting administration reform and innovation are also other tasks of the sector, the SBV governor added.

On the occasion, the SBV was conferred with the Labour Order, first class./.

M&A in banking industry expected to stay high in H2

Mergers and acquisitions (M&A) in the banking industry are expected to remain high for the rest of the year as the industry continues the digital transformation process, according to experts.

The Ministry of Finance (MoF) has issued targets for restructuring banks in a bid to bolster the strength of Vietnam’s financial sector.

VCN - Compared to other countries in the world and in the region, the financial potential of the entire credit institution system in Vietnam is still low, so the SBV has continued to issue an action plan on restructuring the system associated with bad debt settlement in 2021-2025.