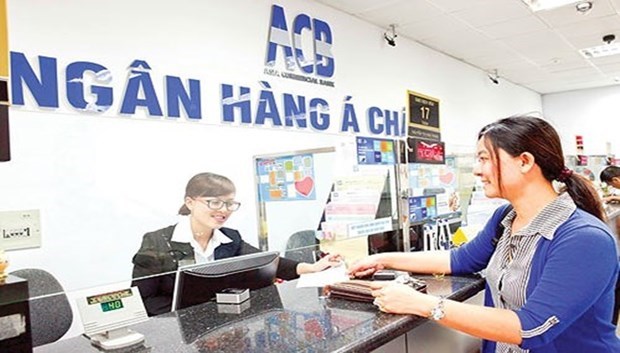 According to the latest survey on the sentiment of banks for the fourth quarter of 2022 released by the State Bank of Vietnam (SBV) recently, 88.3% of banks expected profitability in 2022, which reflects the strong recovery of the economy.

The survey also revealed that 70.4-75.9% of banks expected improved business performance in the fourth quarter and the whole year.

Asia Commercial Joint Stock Bank (ACB) was the latest bank to announce that it completed more than 90% of the annual plan with consolidated pre-tax profit of 13.5 trillion VND, an increase of more than 50% over the same period last year.

Vietnam International Commercial Joint Stock Bank (VIB) also reported positive business performance in the first nine months of 2022 with a total revenue of more than 13.3 trillion VND, up by 29% year-on-year (yoy), and a non-interest income of more than 2.4 trillion VND, contributing 17% to the bank’s total operating income. Thanks to the good control of operating costs, VIB gained more than 7.8 trillion VND of pre-tax profit in the period, up by 46% yoy, and its return on equity ratio (ROE) was 30%, among the market leaders.

The total bad debts and outstanding assets recovered and handled by Sacombank were more than 14.7 trillion VND, helping the bank significantly reduce financial pressure. Therefore, Sacombank’s accumulated net interest income in the first three quarters of 2022 increased by 17.3%. The bank’s service income also grew by 82.3% from the segment of insurance distribution, while the foreign exchange trading also rose by 44.6% year-on-year. Thanks to that, the non-credit income recorded a contribution of nearly 40% of Sacombank’s total income.

Some banks have announced plans to pay cash dividends to shareholders for the first time in three years.

Vietnam’s four biggest State-owned banks have an urgent need for capital increase in 2023 as their charter capital is too low, with some unable to ensure the regulated minimum capital adequacy ratio (CAR), according to industry insiders.