With COVID-19 threatening the goods supply in the south of the country, the Ministry of Industry and Trade (MoIT) has suggested solutions to connect supply chains in the area. 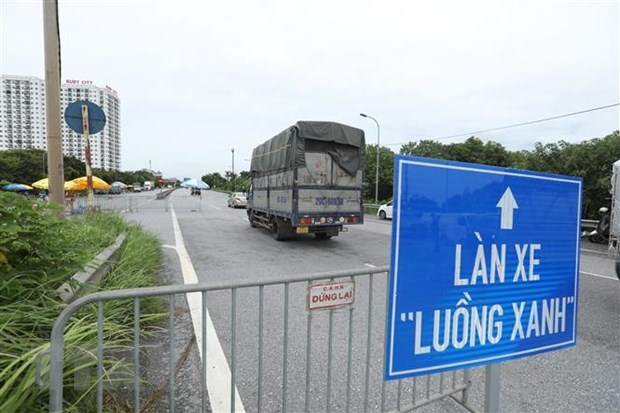 The Ministry of Industry and Trade has asked the Ministry of Transport to issue instructions for issuing QR codes for “green lanes” for businesses to transport goods in the pandemic. — VNA/VNS Photo Minh Quyết

According to a report by the Department of Industry and Trade of Bà Rịa - Vũng Tàu Province, the local goods supply sources are from the province and from neighbouring areas like HCM City, and Đồng Nai, Bình Dương and Lâm Đồng provinces. However the prolonging of Directive 16 could affect the supply of goods, especially on checking shipped goods.

At the same time, the province does not have a goods shipment station to ensure epidemic prevention and goods circulation during lockdown, and it is difficult to connect products from and to other localities.

For example, via online working, Long Sơn Commune’s aquatic products were ordered by Vinmart's supermarket system in HCM City and asked to transport and distribute the products to each store in a total of 18 Vinmart supermarkets in the city.

However, Bà Rịa - Vũng Tàu farmers realised the deal was impossible as they could not transport and distribute such goods before the city's curfew at 6pm every day.

Another problem is the supermarket systems' requirement to have VAT invoices issued immediately after importing goods as it is difficult for inpidual farmers to issue such papers as they have no experience in it.

As commodities producers, the provincial farmers face difficulty in accessing green supermarkets and stores due to the strict requirements.

Đồng Nai Province has had similar problems and mentioned the regulation not to leave the house from 6pm until 6am as troubling staff serving supermarkets and convenience store chains who were active in serving local demand.

While Bà Rịa - Vũng Tàu asked MoIT to support the connection of its consumption and distribution chains, Đồng Nai asked the ministry to provide general guidance for employees of supermarkets and convenience stores to go to work between 4:30am to 6am and work until 8am to prepare goods.

It also recommended the Ministry of Health to direct and regulate rapid tests or PCR tests within 72 hours for drivers in the provinces and cities.

To facilitate businesses in goods circulation, MoIT proposed the Ministry of Transport issue detailed instructions for issuing QR codes for “green lanes” for businesses and people as well as for using software to manage vehicles on the road.

Earlier, MoIT proposed a “green lane” be quickly opened for waterway transport to ensure smooth trading of rice in the areas.

MoIT suggested the Prime Minister assign ministries, sectors, and relevant localities to promptly open a “green lane” for waterway transport, which is currently in charge of 95 per cent of the rice output in the Mekong Delta - the country’s biggest agricultural hub and home to a large river and canal network.

Currently, strict social distancing measures under Directive 16 are being imposed on 19 provinces and cities in the south, including the Mekong Delta, to curb the spread of the virus.

The strict measures are reportedly creating congestion in the transport of rice from fields to factories and ports. — VNS

Vietnam’s fishery export has completely recovered after the COVID-19 pandemic, reeling in 10 billion USD as of November this year, said General Secretary of the Vietnam Association of Seafood Exporters and Producers (VASEP) Truong Dinh Hoe.

The Ministry of Industry and Trade (MoIT) will coordinate with the State Bank of Vietnam to remove difficulties for petroleum enterprises in accessing credit guarantee funds in a bid to prevent disruption in the domestic market.