Officers tasked with preventing fake goods, trade fraud and smuggling in Ho Chi Minh City and southern border provinces have been forced to work hard ahead of Tet (Lunar New Year), which falls on February 12 this year. 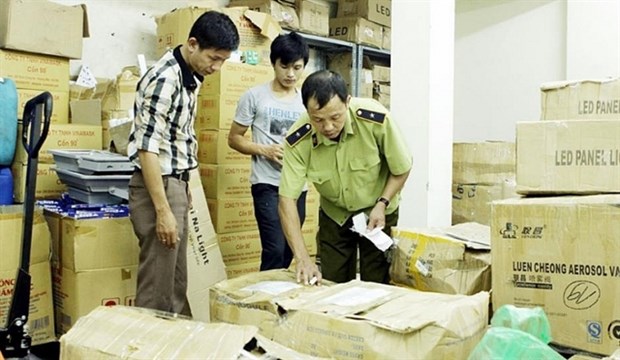 Smuggling and trade fraud are on the rise ahead of Tet, which falls on February 12 this year. (Photo: VNA)

Officers tasked with preventing fake goods, trade fraud and smuggling in Ho Chi Minh City and southern border provinces have been forced to work hard ahead of Tet (Lunar New Year), which falls on February 12 this year.

The company, in Long An province’s Duc Hoa district, made a declaration that would have allowed it to enjoy 0 percent tax instead of the 10-15 percent it had to pay, equivalent to 1 billion VND (43,000 USD).

Now, besides the tax it will also have to pay a penalty of 20 percent of the amount.

According to Steering Committee 389 of HCM City, inspections had been reduced due to the Covid-19 pandemic but specifically target warehouses, yards and sites where large volumes of smuggled goods are likely to be concealed, improving the efficiency of prevention efforts.

According to the city police, local militia have been urged to look out for dubious activities and crack down on the trade in prohibited, smuggled and counterfeit goods.

Drugs, weapons, illegal firecrackers, unsafe and violent toys, and cigarettes are in the sights of officials.

The city border guard force, the Southern Border Guard Soldiers' Department of Drug and Crime Prevention, naval squadron No 28 under the Vietnam Border Defence Force, and border forces in Ba Ria - Vung Tau and Tien Giang provinces will look out for possible violations at estuaries, sea ports and sea borders .

The city is also calling on businesses and consumers to join hands in the fight against smuggling and trade fraud.

Border authorities in the Mekong Delta provinces of An Giang, Kien Giang and Dong Thap are stepping up efforts to keep out smuggled goods, which usually increases during the year-end period.

The contraband is mostly cigarettes and sugar brought in through the Chau Doc city border in An Giang province.

Smugglers transport the goods from Cambodia in boats, motorbikes and trucks at night to evade officers, but if spotted are not averse to attacking them.

Authorities have discovered hundreds of cases of smuggling and confiscated tens of thousands of packs of cigarettes and other goods.

Fishing boats are used to illegally transport and sell oil and petrol at sea.

Hundreds of thousands of litres of oil of unknown origin have been seized by local agencies, who have also collected billions of VND in fines.

Central bank sets rules on transfer of money abroad for sponsorship, assistance purposes
Lastest
Cut off the transnational drug crime lines Strengthening control and supervision of luggage of people on entry Smuggled cigarettes are “hot” in some border areas of Long An near Tet Combatting smuggling at Mong Cai Border Gate Binh Duong Customs investigates businesses committing violations on import and export of cashew What do enterprises importing shipment of antiques declare after being discovered? Nearly 100kg of drugs sent from Germany to Noi Bai discovered HCM City Customs detects a large amount of illegally imported antiques Typical violations on the Northern borderline Strictly handle the problem of fake goods