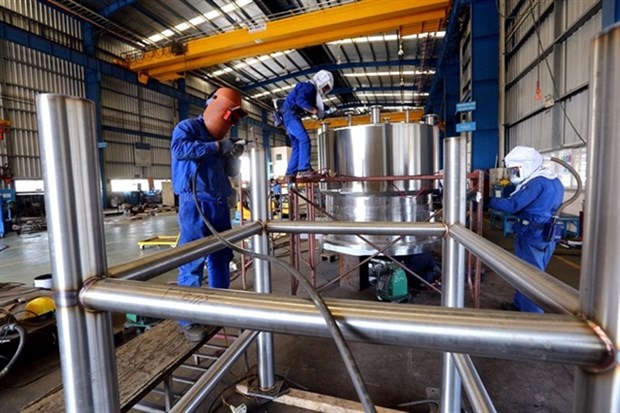 
This is one of the contents of a survey conducted by the General Statistics Office, which has just been announced in the Publication of the 2021 Economic Census.

Accordingly, by type of enterprise, the non-State enterprise sector concentrated the most enterprises and employees as of December 31, 2020, with 660,100 enterprises, accounting for 96.4% of the total number of enterprises nationwide.

The sector attracted 8.6 million employees, accounting for 58.6% of the total number of employees.

The enterprises attracted 1 million employees, accounting for 6.8% of the labour of the entire enterprise sector.

In terms of the economic region, the number of businesses and workers is increasing in the Red River Delta and the Southeast region, where the two largest economic centres in the country are located, HCM City and Hanoi.

The Southeast region and the Red River Delta region clearly show their role as the two largest economic centres in the country, always leading in the number of enterprises and employees.

The region attracts 5.4 million employees, accounting for 36.6% of the total number of employees working in the enterprise.

Along with that, domestic and foreign investment capital into enterprises maintained a fast growth rate over the years, and the scale of enterprises was expanded mainly based on the development of capital factors instead of labour factors.

The source of capital attracted to enterprises has grown rapidly over the years, with the total capital used for production and business of the entire enterprise as of December 31, 2020, reaching VNĐ48.7 quadrillion (US$2 trillion), a year-on-year growth of 12.3%.

"This reflects businesses that expand their scale mainly based on capital growth instead of labour growth; at the same time, it shows that Vietnam is a potential market to attract investment capital, which is a premise to promote resources for in-depth economic growth", said General Director of General Statistics Office Nguyen Thi Huong.

The leader of the General Statistics Office said that the Prime Minister carried out the economic census according to Decision No 307/QĐ-TTg dated February 27, 2020.

This is one of three censuses conducted by the statistics authorities to help the Party and State get an overall economic picture of the country; serving the strategic consulting work of ministries, branches and localities; and grasping the current situation of the economy, and of each industry and locality in particular./.

VCN - On August 1, Ho Chi Minh City officially implemented the collection of fees for the use of works, infrastructure, service works and public utilities in the seaport border gate area (collecting the seaport infrastructure fee) under the new levels with the price adjusted down, helping enterprises reduce cost pressure in the period of production and business recovery.

VCN - The international market in the first months of 2022 has been constantly fluctuating, bringing both positive and negative impacts to enterprises. This makes them set plans and scenarios to be ready to respond.

VCN – After the Covid-19 pandemic was brought under control, Dong Thap Customs Departments removed obstacles for import and export enterprises to support them in restoring their operation.