DDCI promote to improve the business environment in provinces

VCN – District and Department Competitiveness Index (DDCI) is to help build a friendly image of the competent authority; create tools for supervision and be a transparent and reliable feedback channel for investors and enterprises.

On January 20, Vietnam Chamber of Commerce and Industry held an online seminar about building and developing District and Department Competitiveness Index (DDCI) in Quang Ninh province.

According to VCCI, there are about 50 provinces and cities in the whole country that have built and developed the DDCI index. This was aimed to implement the Government's directives on improving the business environment and enhancing competitiveness.

According to experts, the economic development in the locality also posed many problems about the quality of policy implementation, lack of monitoring tools, lack of accountability, and not paying adequate attention to the economic sector.

Therefore, the implementation of DDCI has brought many positive results. Ho Anh Tuan, Deputy Director of VCCI Branch in Da Nang City, said that the results of the DDCI index had made clear and positive changes in the attitudes, thinking and actions of departments and districts. Moreover, this result also provided a useful tool for leaders of provincial and city governments in directing and operating, creating more useful channels for the local business community to reflect their voices to local governments.

Along with that, the implementation of DDCI also changed the awareness and actions of each officer in the local government apparatus and helped to improve the overall quality of economic management of the province and city.

As a province that has successfully applied the DDCI index, Mrs. Vu Thi Kim Chi, Standing Deputy Director of the Department of Investment Promotion and Support in Quang Ninh province, said that DDCI had made a significant contribution to the results of improving the investment and business environment of Quang Ninh province in the 2015-2020 period, contributing to attracting investment capital flows, especially FDI into Quang Ninh.

Thanks to that, Quang Ninh's Provincial Competitiveness Index (PCI) gradually moved to the top 3 positions in the country and in the 2017-2020 period, Quang Ninh rose and maintained its leading position (in one out of 63 provinces and cities) in the whole country for four consecutive years.

For businesses, the reform of administrative procedures and business environment through DDCI has helped Quang Ninh province to have about 18,100 enterprises and many large investment projects.

Talking about the factors relating to the success in applying the DDCI index, Mr. Ho Anh Tuan said that this required the determination and support of the leaders of the provinces and cities to support the implementation of the DDCI. In addition, the implementation of DDCI needed to be derived from the actual local context, the implementation organization's resources as well as the concerns of the government and the business community.

Besides that, there must be an independent, capable and experienced authority that understands the business and ensures maximum objectivity.

However, according to VCCI's experts, the building and development of the DDCI index still faced many challenges such as reactions, data quality and sustainability of operations. In addition, the difficulty was also due to the uneven level of the participation of the business community in the survey, the lack of measures and the relatively low resources for DDCI.

More specifically, Mrs. Vu Thi Kim Chi said that there were still a large number of businesses that were not aware of their roles, responsibilities and rights. The percentage of returned ballots has only reached 30-35%. In particular, there were still many forms without sufficient information or incomplete information. On the other hand, the actual implementation of DDCI showed that some grassroots agencies, sectors and localities have not really taken the initiative to synchronize and had not been concerned and deeply analyzed DDCI results to have specific and creative solutions in the following year.

Therefore, for successful implementation, Chi believed that drastic and regular direction of leaders of provinces and cities on DDCI would play an important role through the promulgation of DDCI plans and programs.

Not only that, the implementation process required an independent, capable and experienced authority that understands the business, and ensures absolute objectivity.

The Vietnam Chamber of Commerce and Industry (VCCI) has suggested adding regulations related to digital transformation to the draft law on amending and supplementing a number of articles in the Law on Intellectual Property (IP).

VCN - According to Dr. Nguyen Dinh Cung, former director of the Central Institute for Economic Management (Ministry of Planning and Investment), the Covid-19 pandemic has "slowed" reform efforts to improve the business environment. In order for the Covid-19 recovery process to have the best results, businesses are in need of an open, safe, and free business environment that removes all barriers.

Shortage of key logistics centers in the Mekong Delta

VCN – Experts have analyzed and proposed many solutions to support the development of logistics in key economic regions and improve the export capacity of goods at the workshop “Enhancing the competitiveness of Mekong Delta’s enterprises from the logistics perspective” jointly held by Saigon Newport Corporation and VCCI Can Tho on March 30. 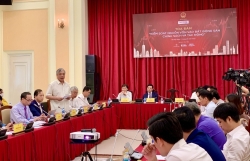 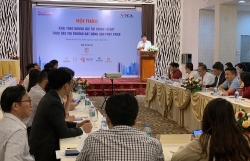 Trillions of dong lost due to loopholes in land price declaration