Vietnamese economic growth is on the way to recovery and development, but is facing two problems, according to economist Võ Trí Thành. 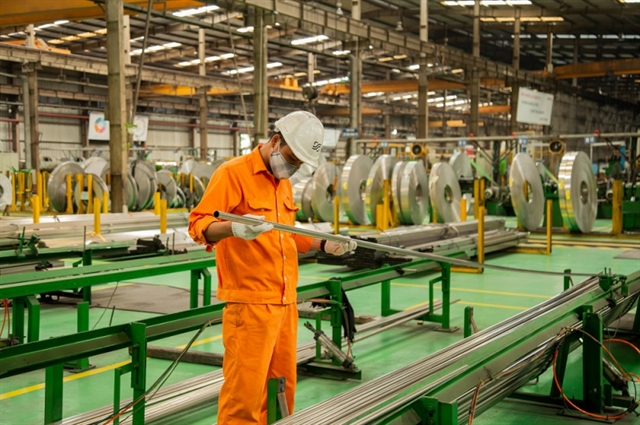 Even if the economic recovery programme is implemented well, the country's growth this year may still decrease compared to the calculation at the beginning of this year. — Photo nhandan.com.vn

Vietnamese economic growth is on the way to recovery and development, but is facing two problems, according to economist Võ Trí Thành.

First, global recovery momentum and economic growth are slowing down.

Specifically, the International Monetary Fund (IMF) previously forecast that global economic growth would reach 4.9 per cent this year, but it has decreased to 4.4 per cent in January and would decline further in the future due to the instability caused by political conflicts, many developed countries adjusting their monetary policies and the "shrinking" of support packages.

The second problem facing Việt Nam is the risk of macroeconomic instability, especially inflation, that started to appear last year.

When researching and implementing the economic development recovery programme over two years (2022-2023), the Ministry of Planning and Investment calculated that in addition to the positive impact of the support packages on social security, businesses can also face risks such as inflation, budget deficit or public debt.

Accordingly, even if the economic recovery programme is implemented well, the country's growth this year may still decrease compared to the calculation at the beginning of this year; at the same time, inflation is also difficult to control below four per cent as required.

Along with that, the conflict between Russia and Ukraine will have a negative impact on economic growth, with supply chain disruptions and increases in input production costs.

Therefore, the implementation of the economic recovery programme is more important and urgent because the programme is designed to promptly remove the difficulties faced by businesses.

Phan Đức Hiểu, permanent member of the Economic Committee of the National Assembly, also said that when developing the economic recovery programme, other factors of the COVID-19 pandemic were taken into account, so solutions were foreseen when designing the programme.

One of those solutions was a harmonious combination of fiscal and monetary policies to match macro fluctuations.

Deputy Minister of Planning and Investment Trần Quốc Phương said that since the issuance of Resolution No 11/NQ-CP of the Government on the programme of socio-economic recovery and development and the implementation of Resolution No 43/ 2022/QH15 of the National Assembly on fiscal and monetary policies to support Resolution 11, a group of mechanisms and policies had been promulgated and were being implemented, especially policies of the Ministry of Finance related to tax exemption and reduction, which are worth about VNĐ9 trillion.

Thành said that the implementation progress had been much better, especially the smooth coordination between the National Assembly and the Government in the development and implementation of the programme.

In order for the economic recovery programme to play its role, it was necessary to immediately solve the problem of implementing monetary and fiscal policies, he said.

In fact, Phan Đức Hiếu said that the Prime Minister was drastic in implementing the economic recovery programme.

This shows that 20 days after the National Assembly passed Resolution 43/2022/QH15 on fiscal and monetary policies to support the programme of socio-economic recovery and development, the Government issued a detailed programme on economic recovery.

“However, besides the policies that have been implemented, many policies are still in the process of being developed and are waiting to be implemented. This will affect the progress and effectiveness of the economic recovery programme, and at the same time, affect the resilience of the business sector,” said Hiếu.

Directly affected by policies to support recovery, Nguyễn Đức Thiện, General Director of Việt Nam Electricity's Northern Power Corporation (EVNNPC), also agreed that the policy was right, but if the implementation was not good, the beneficiaries would be disadvantaged and there would be no spillover to the economy.

Lê Mạnh Hùng, Director of the Enterprises Development Department, Ministry of Planning and Investment, admitted that there were many policies that businesses could not access in the previous period, such as tax, credit, and policies for employees.

However, now there had been summative assessments, agencies had partially digitised, removed input conditions, beneficiaries were also clearer and especially the big change in the participation of local government, he added.

"Hopefully the policies implemented in the near future will not have the above problems," said Hùng. — VNS

Economic cooperation is a driving force of the comprehensive partnership between Vietnam and Canada, Vietnamese Ambassador to Canada Pham Cao Phong has said.

Though the State Bank of Việt Nam (SBV) has hiked interest rates twice in a month, experts agreed the SBV has no other choice but to take strong measures to curb upward pressure on the USD/VNĐ exchange rate and inflation.

VCN - From November 7, 2022, the General Department of Vietnam Customs will provide one more administrative procedure on the system through the online public service system (https://pus.customs.gov.vn).