Up to 68.4% of logistics companies in Vietnam saw increases in their revenues in the first nine months of 2022 compared to the same period of last year, a study released by Vietnam Report JSC showed. 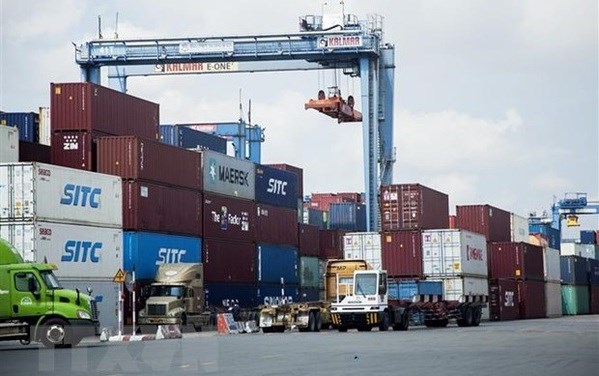 Up to 68.4% of logistics companies in Vietnam saw increases in their revenues in the first nine months of 2022 compared to the same period of last year, a study released by Vietnam Report JSC showed.

Of the 34 listed logistics companies that were surveyed, 64.7% said their revenues had maintained growth compared to the pre-pandemic period, said Vu Dang Vinh, General Director of Vietnam Report.

Up to 26.5% of businesses moved from the "recovery" group in the 2019 - 2021 period to "maintaining growth momentum" in the 2019 – 2022 period, reflecting efforts of logistics enterprises in the recovery process and gaining economic growth in the post-COVID-19 period.

Vietnam Report’s survey pointed out that the biggest difficulties that logistics enterprises are facing are fluctuations in energy and input material prices; competition among businesses in the same industry; supply chain-related risks; political instability in the world and reduced demand for shopping. Fuel costs account for a large proportion of the operating cost structure, posing a big problem for logistics enterprises.

About 63.2% of the surveyed enterprises said that total costs increased in the first nine months of this year compared to a year earlier. Nearly one-third of the businesses recorded a significant increase in fuel costs.

Nearly 80% of the businesses forecast that the Russia-Ukraine conflict will continue until the end of 2023, even after COVID-19 prevention and control measures are removed in most markets. In addition, 52.6% of the surveyed enterprises saw a decline in the number of orders and an increase in inventory. Notably, some businesses recorded up to a 40% reduction in orders compared to the same period last year.

To deal with the issue, Vinh recommended that in the coming years, businesses need to renew their mindset, putting people at the centre of decisions while establishing positive cultural norms and continuously training the workforce.

The Vietnam Report JSC also unveiled a list of the top 10 prestigious logistic companies in 2022 on the same day.

The rankings have been developed based on three main criteria, including financial capacity, media credibility, and the surveys of logistic companies conducted in October and November 2022./.

The coming visit to Singapore by Vietnamese Prime Minister Pham Minh Chinh will be a key platform for both countries to reaffirm their excellent ties, said Singaporean Foreign Minister Vivian Balakrishnan in his written interview with the Vietnam News Agency.

Vietnam’s e-commerce is projected to continue booming in 2023 and developing firmly in the following years, aided by a series of growth drivers such as the wave of digital transformation, consumers’ trust, technological infrastructure, and favourable mechanisms and policies issued by the Government.

Two-way trade revenue between Vietnam and Laos in 2022 grew 24% from the previous year to reach some 1.7 billion USD, beyond expectations of their leaders at the 44th meeting of the Vietnam – Laos Inter-Governmental Committee on Bilateral Cooperation earlier last year.