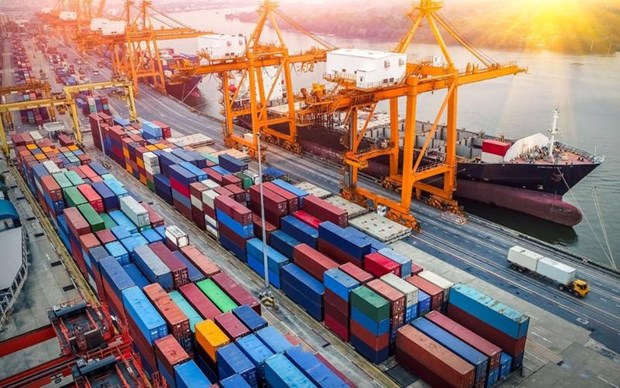 On seven-month calculation, the figure reached 185.33 billion USD, marking a yearly rise of 25.5 percent. Of which, 48.52 billion USD was from domestic economic sector, up 14.6 percent and the remaining from foreign-invested sector, inclusive of crude oil, up 29.9 percent.

Twenty-seven goods groups earned over 1 billion USD from export, or 90.2 percent of the total. Five of them brought home more than 10 billion USD, equivalent to 57.8 percent.

Export of materials and mineral resources was estimated at 1.87 billin USD, up 1.4 percent annually while that of processed industrial goods was 164.89 billion USD, up 27 percent. Agro-forestry products raked in 13.65 billion USD and fisheries 4.92 billion USD, up 16.7 percent and 12 percent, respectively.

According to the GSO, imports in July was estimated at 28.7 billion USD, up 3.8 percent month on month and 29.9 percent year on year.

Seven-month imports rose by 35.3 annually to 188.03 billion USD, 66.31 billion USD of which were from domestic sector and the remaining from foreign-invested sector.

Over 1 billion USD were spent on 31 goods each, or 87.5 percent of the total imports.

The country ran a deficit of 1.7 billion USD in July, bringing the figure in seven months to 2.7 billion USD.

Thailand’s SCG Packaging Plc (SCGP) will invest 11.79 billion baht (352.9 million USD) to develop a paper factory in its new production complex in northern Vietnam, which has grown into one of the region's major export centres, according to the Bangkok Post newspaper on September 21.

Risk assessment to enhance the efficiency of container screening
Lastest
Facing with five difficulties, the agricultural sector wants to socialise testing Covid-19 and vaccination Thai packaging paper company increases investment in Vietnam PM requests measures to promote production and sale of farm produce Removing difficulties for the shrimp industry with the peak of exports at the end of the year It's time to build a scenario to gradually open the economy How will employees at bankrupt enterprises with social insurance debts be resolved? China is changing drastically, giving up the "habit" of seasonality to trade agricultural products Council for business cooperation in response to COVID-19 set up Great opportunity for pangasius exports Businesses hope to "live together" safely with Covid-19 soon