Border guard forces of Lao Cai northern province of Vietnam joined talks on border issues in the first half of the year with the border control forces in Hekou district of China’s Yunnan province on June 25. 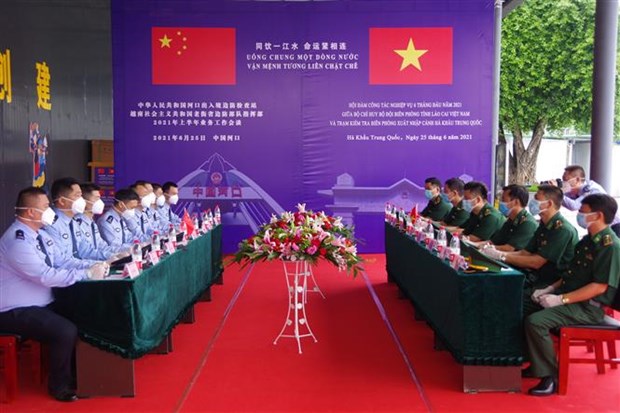 At the talks (Photo: VNA)

Border guard forces of Lao Cai northern province of Vietnam joined talks on border issues in the first half of the year with the border control forces in Hekou district of China’s Yunnan province on June 25.

At the talks held at the Lao Cai-Hekou International Border Gate, they stated that the sides have complied with the implementation of three legal documents on border and bilateral agreements, as well as joined hands to facilitate trade of goods via the border gate and ensured COVID-19 prevention and control at the same time.

The forces had arranged four joint inspections with the participation of 403 officers and soldiers from each side and regularly updated adjusted policies and regulations related to border management, security and order and COVID-19 developments in the border areas.

They also agreed on prioritised customs clearance routes for farm produce and aquatic products in an attempt to create optimal conditions for exports-imports and economic development while following anti-pandemic measures.

In the reviewed period, the two sides carried out immigration procedures for more than 1,000 people with multiple nationalities, imported 36 products weighing 932,097 tonnes and exported 14 goods of close to 594,000 tonnes.

They are exerting efforts in arranging quarantine for illegal migrants and taking necessary steps to hand them over to relevant agencies.

Trade activities at sub-border gates and crossings have been suspended due to the adverse impact of COVID-19. At the talks, the two sides agreed that they will work with relevant agencies to resume travel and trade exchanges in the border areas in the coming time when the pandemic is kept under control.

On the occasion, leaders of the border guard forces presented the title of messenger of the Vietnam-China friendship to an official of each side. The border control post in Hekou also offered aid to help four Lao Cai’s border stations battle COVID-19.

On June 24, the Lao Cai Border Guard High Command and border guards in some localities of Yunnan province held a patrol on illegal entry prevention and COVID-19 containment.

They set up a patrol command and teams which will regularly patrol along the shared borders/.