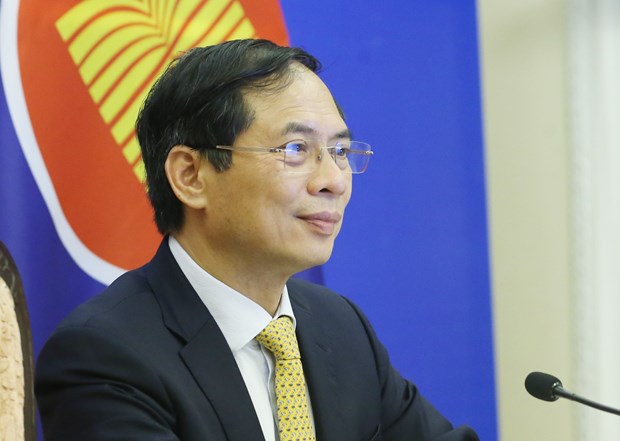 Addressing the event, FM Son welcomed the ASEAN-Australia strategic partnership’s new development stage with the official organisation of their annual summit from this year.

He suggested that Australia continue to support ASEAN countries in responding to COVID-19 in a timely and effective manner, underlining that ASEAN and Australia should work harder to ensure the maintenance of market opening and the stability of supply chains’ connectivity.

Both sides should effectively optimise regional trade agreements, he said, encouraging Australia to engage deeper in efforts to narrow development gap and ensure inclusive growth in sub-regions, including the Mekong sub-region.

The Vietnamese FM proposed that Australia coordinate in strengthening dialogue and trust building as well as encouraging restraint and respect for international law, including the 1982 UN Convention on the Law of the Sea (UNCLOS).

He affirmed ASEAN’s commitment to fully and effectively implementing the Declaration on the Conduct of Parties in the East Sea (DOC) and continuing efforts to reach an effective and practical Code of Conduct in the East Sea (COC) in line with international law and the UNCLOS 1982.

Highlighting the firm foundation of the ASEAN-Australia relations since 1974, Australian Minister for Foreign Affairs and Minister for Women Marise Payne affirmed that Australia attaches great importance to partnership with ASEAN and supports the bloc’s central role.

She said that Australia is implementing a 500 million AUD (370.84 million USD) package to support comprehensive recovery in the region. She affirmed Australia’s commitment to conducting the medical security and vaccine access initiative worth 523 million AUD as well as assisting ASEAN in realising the Comprehensive Recovery Framework.

Australia will provide scholarships for 40 medical experts and workers from ASEAN countries and will organise an ASEAN-Australia dialogue on mental health for youngsters in the time to come, she added.

A representative from Malaysia, coordinator for the ASEAN-Australia relations, underlined that Australia is one of the important economic partner of ASEAN with two-way trade reaching over 100 billion AUD. ASEAN countries lauded Australia’s support to the bloc through the contribution of 1 million AUD to the COVID-19 ASEAN Response Fund and 21 million AUD to the ASEAN Centre for Public Health Emergencies and Emerging Diseases (ACPHEED). 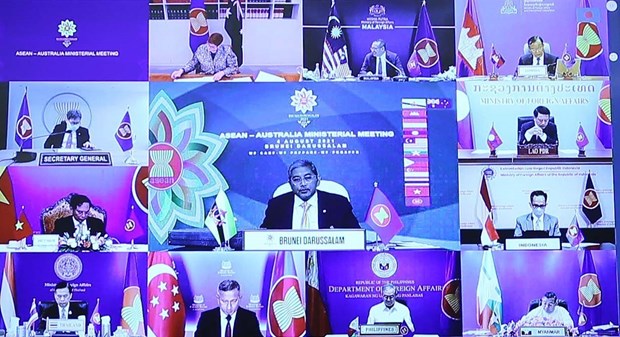 At the event (Photo: VNA)

Australia affirmed that the country supports ASEAN's principle stance as well as the promotion of the association’s role in promoting dialogue and trust building, ensuring the full and effective implementation of the DOC toward building an effective and substantive COC in line with international law and the 1982 UNCLOS.

Australia welcomed outcomes of the ASEAN Leaders’ Meeting on April 24, 2021 and affirmed the country’s support to the role and efforts of ASEAN in promoting dialogue and conciliation in Myanmar and assisting the country in seeking solutions to stabilise the situation.

Concluding the event, Malaysia handed over the role of coordinator of the ASEAN-Australia relations in the 2021-2024 to Laos./.

Canberra-based Mekong Organics held a ceremony on September 15 to launch the “Promoting organic food certification & trade between Australia and Vietnam” project which is supported by the Australian Government.

Ambassador Nguyen Hai Bang, Permanent Representative of Vietnam to ASEAN, chaired the 65th meeting of the Initiative for ASEAN Integration (IAI) Task Force and the task force’s 11th consultation with ASEAN partners via videoconference on September 9 and 10.

Vietnam ready to act as a bridge between Russia and ASEAN: Minister

As an active member of the Association of Southeast Asia Nations (ASEAN) and a reliable partner of Russia, Vietnam is ready to serve as a bridge connecting Russia and the Eurasian Economic Union (EAEU) with ASEAN nations, Vietnamese Minister of Industry and Trade Nguyen Hong Dien said.