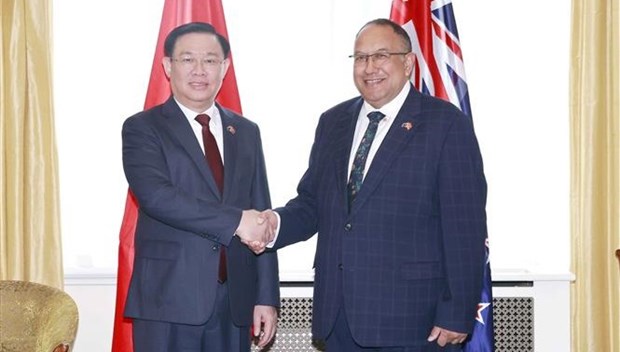 Hue made the statement during his talks with Speaker of the New Zealand House of Representatives Adrian Rurawhe in Wellington on December 6 following the welcome ceremony.

Vietnam will work together with New Zealand for important achievements towards the 50th anniversary of bilateral diplomatic ties by 2025, he noted.

He said his visit aims to further deepen bilateral strategic partnership, opening up new prospects for cooperation between the two legislatures not only bilaterally but at regional and global forums in the context that the two countries have fully reopened following the pandemic.

According to him, both sides shared strategic values and interests as close friends and partners, which holds significance amid complicated and uncertain developments in the region and the world.

Highlighting the importance of people-to-people exchange, Rurawhe described Vietnam as a favourite destination for New Zealand people, with about 40,000 arrivals to the country each year before the pandemic.

At the talks (Photo: VNA)

The two sides agreed on the need to further strengthen economic-trade-investment cooperation, making it a driving force for development of bilateral ties.

The host hailed Vietnam for officially opening the market for New Zealand’s strawberry and pumpkin.

The Vietnamese airlines are ready to open direct flights to New Zealand’s major cities, he said.

On the occasion, the Vietnamese leader asked his New Zealand counterpart to continue creating favourable conditions for Vietnamese community in his country.

Host and guest agreed to build a cooperation agreement between the two legislatures to create a legal framework for their ties, continue facilitating the exchange of delegations to share experience on legislation and personnel training, especially English language training, among their committees and offices.

They vowed to maintain consultations and mutual support at multilateral cooperation mechanisms as well as regional and global parliamentary forums to make active contributions to peace, stability, cooperation and development in the region and the world.

The New Zealand leader also promised to visit Vietnam at an appropriate time./.