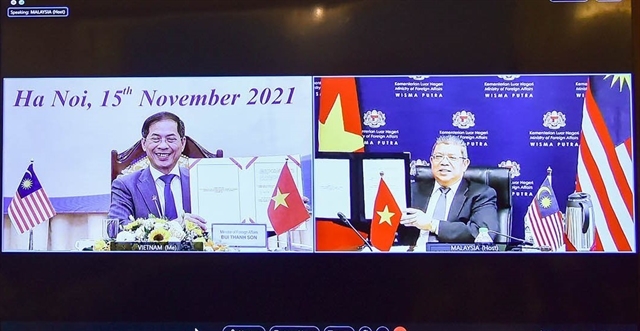 Both sides reviewed the implementation of the action programme for the 2017-2019 period in all areas, and discussed orientations and focus of cooperation to lift the strategic partnership between Việt Nam and Malaysia in a more practical manner.

They agreed to adopt the action programme for the 2021-2025 strategic partnership with major orientations to effectively tap each country’s potentials and strengths, towards achieving sustainable and resilient development post-pandemic with US$18 billion in two-way trade by 2025. They also agreed to recognise each other's “vaccine passports” soon.

The Malaysian FM, for his part, said that Malaysia wishes to effectively boost ties with Việt Nam – the only strategic partner of Malaysia in ASEAN. He agreed with Việt Nam’s proposals and proposed the two nations’ ministries and agencies soon discuss celebrations for the 50th anniversary of bilateral diplomatic ties in 2023.

He suggested Việt Nam import more palm oil from Malaysia and offer support to Malaysia to open international education establishments in the country.

The two sides consented to offer mutual support and work closely together at regional and global forums, especially at the United Nations, ASEAN and ASEAN-led mechanisms. They vowed to tap opportunities and benefits from new-generation free trade deals such as the Regional Comprehensive Economic Partnership (RCEP) and the Comprehensive and Progressive Agreement for Trans-Pacific Partnership (CPTPP).

They underlined the importance of maintaining peace, stability, security, maritime and aviation safety and freedom in the East Sea, settling disputes by peaceful measures in line with international law, including the 1982 United Nations Convention on the Law of the Sea (UNCLOS).

They also expressed support for serious and full implementation of the Declaration on the Conduct of Parties in the East Sea (DOC), and negotiations towards reaching an effective, efficient Code of Conduct in the East Sea (COC) in accordance with international law, including the 1982 UNCLOS.

Concluding the event, the two ministers signed the meeting's minutes and agreed to hold the seventh meeting in Việt Nam at a convenient time for both sides. — VNS

Further efforts to promote transfer of foreign technologies to Vietnam

Deputy Prime Minister Vu Duc Dam has signed a decision on adjustments and supplements to a number of articles of Decision 1851/QD-TTg dated December 27, 2018 by the Prime Minister approving a project to promote the transfer, mastering and development of foreign technologies to Vetnam in prioritised industries and fields to 2025 with an orientation to 2030.

Thai energy company Banpu PCL has agreed to acquire the companies holding a 50-MW portfolio of two solar parks in Vietnam in a deal worth 26.7 million USD, according to the company.

Vietnam's tuna exports to the US has increased stably, accounting for 15 percent of the market share in this country.

Further efforts to promote transfer of foreign technologies to Vietnam