Many businesses in the sugar industry reported fruitful earning results for the fiscal year 2020-2021. 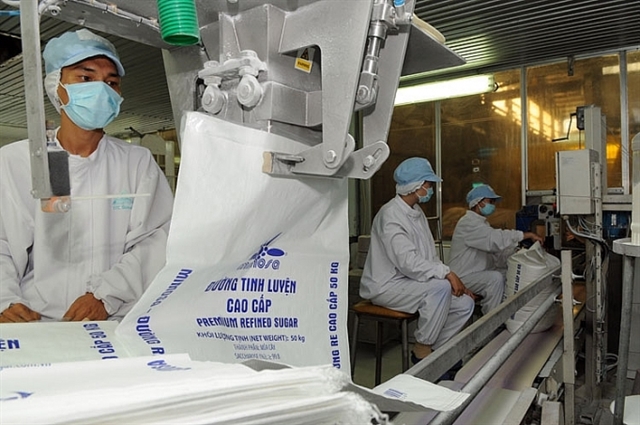 A Thành Thành Công Biên Hòa JSC factory. The company reported revenue of VNĐ14.9 trillion, up 15.6 per cent compared to the previous year. — Photo the courtesy of SBT

Many businesses in the sugar industry reported fruitful earning results for the fiscal year 2020-2021.

Sơn La Sugar JSC (SLS) achieved profit after tax of VNĐ164 billion for the whole year, up 38 per cent, but revenue decreased compared to the previous year, down 23.6 per cent to VNĐ801 billion. SLS exceeded its profit target for the year by VNĐ138 billion.

In the fourth quarter of the year, SLS recorded profit of VNĐ76 billion, up 31 per cent year-on-year and contributing 46.3 per cent to total annual profit.

In the fourth quarter, the company's revenue reached more than VNĐ4.15 trillion, up 10.2 per cent over the same period last year. Profit after tax reached VNĐ195 billion, down 9.3 per cent.

The strong recovery of world raw-sugar prices drove the positive results. According to the International Sugar Organisation (ISO), in the first half of June 2021, the price index of raw sugar and white sugar remained high.

In the domestic market, sugar prices also benefited from a new policy.

The imposition of anti-dumping and anti-subsidy taxes by the Ministry of Industry and Trade on sugar from Thailand limited imports, making supply and demand more balanced, pushing up sugar prices.

Lê Trung Thành, vice chairman of Lam Sơn Sugar Joint Stock Corporation Board of Directors, said that the price of finished sugar had increased by 20 per cent compared to the same period last year.

Thành said the company spent VNĐ30 billion to invest in growing sugarcane, fertiliser and farming techniques. As a result, the number of farmers returning to sugarcane farming increased by about 20 per cent compared to the previous year, ensuring growth in the new period.

The purchase price of raw sugar cane had increased sharply in recent years, from 900,000 to VNĐ1.1 million per tonne, and was expected to increase to VNĐ1.2 million per tonne in the new crop, he said.

However, in the short term, sugar enterprises were facing challenges due to the fourth outbreak of COVID-19. If the pandemic was well controlled, all production and business activities would return to normal, especially the sugar enterprises as they mainly served the domestic market, he said.

“The transportation of goods to factories is also limited, drivers must comply with regulations on disease prevention and COVID-19 testing,” he added.

An industry insider said when the Ministry of Industry and Trade applied anti-subsidy and anti-dumping taxes on sugar imported from Thailand, there were cases of more sugar being imported from other countries such as Malaysia, Indonesia and Cambodia.

The imposition of anti-dumping and anti-subsidy taxes on refined and raw sugar imported from Thailand would last for five years, officially effective from June 16, 2021, he said. This was expected to remove difficulties and challenges for local sugar businesses who had to compete with cheap Thai sugar flooding the domestic market. VNS

VCN – The outbreak of the Covid-19 pandemic in the past two years disrupted working trips of reporters to border gates. We had a chance to come back to Cau Treo International Border Gate while the customs clearance activities are recovering.

VCN - A series of solutions to support businesses implemented by Ba Ria - Vung Tau Customs Department during and after the Covid-19 pandemic has brought positive effects, contributing to the province’s overall economic recovery.

Banks want permission to connect to national population database
Lastest
Two-way trade between Vietnam and the UK recovers thanks to UKVFTA Better policies needed to develop ocean economy Newly-established businesses in H1 exceed 70,000 for first time Pressure to increase the exchange rate, will the State Bank take action? More than 10 million medical masks exported in May Explosive e-commerce growth drives demand for logistics Ministry listens to firms" difficulties, pledges to raise support Việt Nam attracts more than $14 billion of FDI in H1 Vietnam ranks second in ASEAN in terms of green debt development How to speed up exports of processed foods to Japan?