President Nguyen Xuan Phuc on December 4 had a series of meetings with organisations which have made significant contributions to the Vietnam-Republic of Korea (RoK) friendship, economic-cultural cooperation, and people-to-people exchanges. 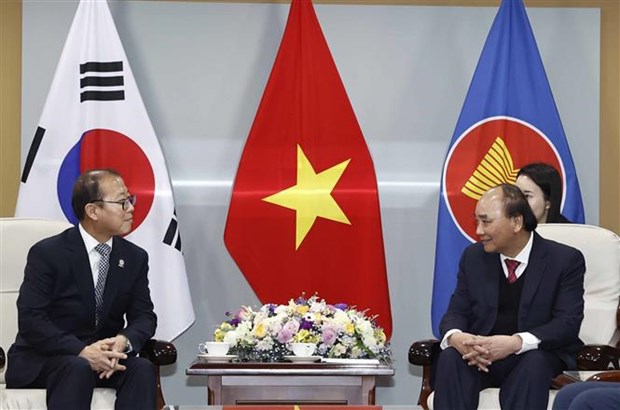 Right upon his arrival in Seoul on December 4, President Nguyen Xuan Phuc had a series of meetings with organisations which have made significant contributions to the Vietnam-Republic of Korea (RoK) friendship, economic-cultural cooperation, and people-to-people exchanges.

Hosting a representative of the Ly family in the RoK, the President affirmed that the Vietnamese State and people are happy about and proud of the family’s success as well as contributions to both nations and their relations.

The State leader recommended they continue organising delegations to visit Vietnam on holidays, introduce Vietnam’s market and investment conditions, encourage Korean businesses to invest in the country, and promote Vietnamese culture among Korean people, making an important contribution to the bonding between the nations.

The representative said with the support of the Vietnamese embassy, the family’s activities for exchange and cooperation promotion have been launched smoothly and effectively.

Expressing his delight at the strong development of the nations’ ties, he wishes to receive further attention from the President and relevant Vietnamese agencies, especially regarding projects to promote Vietnam-RoK economic and people-to-people exchanges that are being implemented by his family.

Receiving the RoK-Vietnam Friendship Association (KOVIFA), Phuc wished and believed that the association will continue taking the lead and promoting its role in people-to-people exchange works and boosting the nations’ multifaceted collaboration.

It is also necessary to encourage Korean firms to step up investment and trade cooperation with Vietnam; and to support the 200,000-member Vietnamese community in the RoK, especially families of Vietnamese brides married to Korean citizens, the President noted. 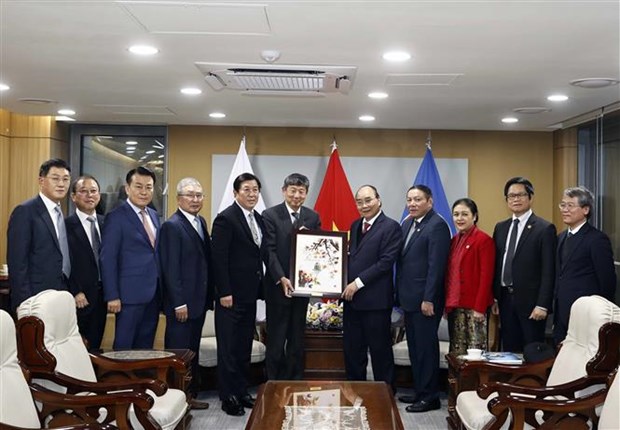 At the meeting with the Korea and Vietnam Economic and Cultural Association (KOVECA), the President suggested it further promote the two countries' cooperation plans and projects, especially in the fields of high technology, renewable energy, new environmentally friendly industries, technology transfer, and medicine in the face of epidemics.

KOVECA's representative stressed a belief that Phuc’s visits will open up key collaboration opportunities for the sides across spheres.

He acknowledging their active works in running many research and quality exchange activities, and making of many correct assessments and substantive and meaningful proposals for strengthening the two countries' cooperative relations.

He said he believes that a report, which is currently being jointly developed by the group to be submitted to the two governments, will be of good quality and have practical value.

The EPG's reprentative hoped the report will make a positive contribution to the governments' policies planning to promote bilateral engagements, deepening the countries' relations toward effectiveness for the mutual benefits and for cooperation and development in the region and the world.