National Assembly Chairman Vuong Dinh Hue and his entourage arrived at Wattay International Airport in Vientiane at noon on May 15, beginning their official visit to Laos. 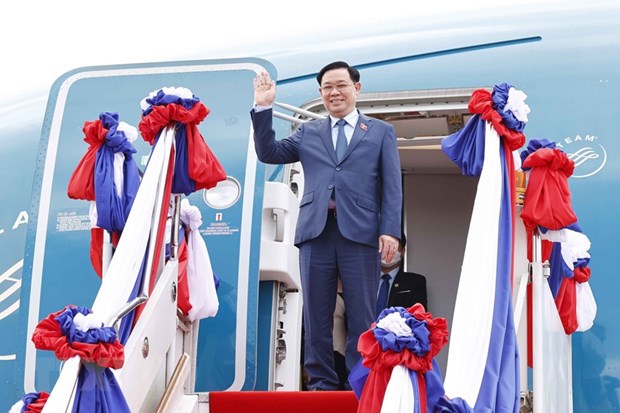 National Assembly Chairman Vuong Dinh Hue and his entourage arrived at Wattay International Airport in Vientiane at noon on May 15, beginning their official visit to Laos.

The three-day visit is being made at the invitation of President of the Lao National Assembly Xaysomphone Phomvihane.

Representatives from the Lao side at the welcome ceremony were Vice President of the Lao NA Sommad Pholsena, Chairman of the Lao NA’s Committee for Foreign Affairs Sanya Praseuth, and NA Deputy Secretary General Bounthan Bounvilay.

This is the first official visit to Laos by a senior leader of Vietnam in the Laos - Vietnam Solidarity and Friendship Year 2022, and also the first by Hue as Chairman of the Vietnamese NA. Hue is also the first foreign parliamentary leader to visit Laos since the country’s 11th National Party Congress and the 9th-tenure NA’s first session.

The visit takes place amid a number of important activities being held in the Vietnam - Laos Solidarity and Friendship Year to mark the 60th founding anniversary of diplomatic ties of the two countries (September 5) and 45 years since the signing of the Laos - Vietnam Treaty of Amity and Cooperation (July 18).

Vietnam and Laos are neighbours with a traditional and close-knit friendship founded by Vietnamese President Ho Chi Minh, and Lao Presidents Kaysone Phomvihane and Souphanouvong, and nurtured by generations of both countries' leaders and people.

Bilateral cooperation has been strengthened over the time and the people of Vietnam and Laos have always walked side by side in the struggles for national liberation as well as national construction and development in each country./.

Vietnam-Laos trade turnover on the rise

Trade revenue between Vietnam and Laos in the first five months of this year stood at 690.6 million USD, up 21 percent year-on-year.

VCN – Since the Covid-19 pandemic was brought under control in Vietnam and Laos, drug-related crimes in the two countries has increased, though competent forces are strengthening their resolve to stop these crimes.

The 15th National Assembly adopted a resolution on NA inspection activities for 2023 at its ongoing third session in Hanoi on June 6.