Many British investors are seeking investment opportunities in Vietnam in the hope of cashing in on free trade agreements (FTAs) that Vietnam has signed with the UK and other economies worldwide. 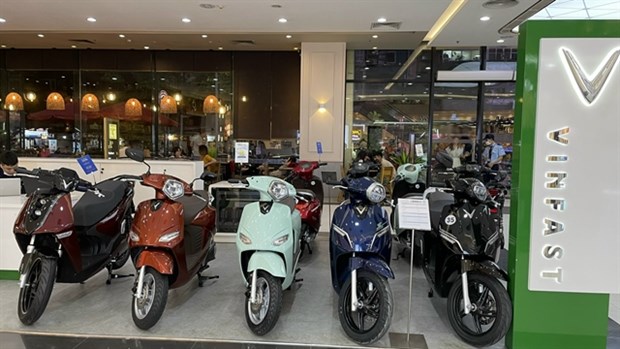 Electric motorbikes manufactured by Vinfast. Many UK businesses are looking into electric mobility industry in Vietnamwhich is expected to grow by double digits in the next few years. (Photo: VNA)

Many British investors are seeking investment opportunities in Vietnam in the hope of cashing in on free trade agreements (FTAs) that Vietnam has signed with the UK and other economies worldwide.

The UK-Vietnam Free Trade Agreement (UKVFTA), which officially took effect in May 2021, was one of the first trade deals inked by the UK after it left the European Union by the end of 2020, which reflected the importance of Vietnam in the UK’s trade policy.

Bilateral trade and investment between the two economies have grown significantly with a growth rate of 17% last year.

Data of the Foreign Investment Agency under the Ministry of Planning and Investment showed as of October 20, 2021, the UK had 439 valid projects amounting to nearly 4 billion USD in registered capital in Vietnam.

Many big companies in many industries such as Dragon Capital, Standard Chartered, Diageo, Prudential, AstraZeneca, HSBC, Unilever and Jardines have established their operations in Vietnam and played important roles in developing certain sectors of the economy including finance, medicine, education, fashion and cosmetics.

Now, besides large companies, many UK small and medium-sized enterprises (SMEs) stand to gain significantly from the UKVFTA and other 14 FTAs that Vietnam has signed with more than 50 countries around the world.

“We see there was a spike of interest (from UK businesses) from March onwards, in conjunction with (Vietnam’s) opening up of borders, which made it much easier for investors to come to the country,” said Maria Kotova, a Gobal Business Development Manager and senior advisor from Dezan Shira & Associates, a professional services firm that provides FDI services for investors worldwide.

They include it being a fast growing middle income country with a population of almost 100 million and GDP recorded last year at about 362.6 billion USD; a cheap and skilled workforce which has increased productivity and competitiveness over time; and attractive tax incentives, for example, corporate income tax of 10% if a company invests in technology for 15 years, compared to the traditional 20% on the market.

According to data from the National Wages and Productivity Commission, while not the lowest in Southeast Asia, Vietnam’s average monthly wage is around one-third lower than wages in the ASEAN-4 nations (including Thailand, Malaysia, the Philippines and Indonesia) and around half of those in China.

However, most notably is broad and easy trade access to the entire region thanks to wide-ranging FTAs that Vietnam has signed with different blocs/countries which enable low tariff rates, Maria said.

She noted a lot of companies are either staging or establishing production facilities in Vietnam. They are producing and exporting products to many countries at zero tax rates or very low tax rates, or they export products to Vietnam and further process here to achieve a certain percentage of labour to be qualified as made-in-Vietnam products and then export those products to almost every country with which Vietnam has signed FTAs.

Vietnam is playing an important role in many UK companies’ persification strategies as it is considered a major trade and investment hub in the Asia-Pacific region by being a party of the Regional Comprehensive Economic Partnership (RCEP) and Comprehensive and Progressive Agreement for Trans-Pacific Partnership (CPTPP) which the UK is seeking to join.

“I think a lot of our clients are looking into automotive and mobility industry in general, especially electric mobility which will be growing in double digits in the next few years,” Maria said, adding a lot of opportunities are presented to those who are working in the supporting industries.

Regarding the renewable energy industry, this is at the centre of the Vietnamese Government's development strategy in the coming years, focusing on wind and solar energy and biomass. So UK businesses may participate in some big infrastructure development projects.

Last, about medical devices, currently, 90% of medical devices in Vietnam are imported. As demand for medical supplies and equipment is high given low domestic production capacity, the Vietnamese Government encourages the imports of foreign medical devices and offers low input and restrictions.

However, as only businesses registered in Vietnam with import licenses can distribute medical devices, Kotova said it's very important for UK companies to establish a local office or appoint a local distributor to work with.

Vietnamese Government leaders have reaffirmed Vietnam is willing to create favourable conditions for investors of the UK to invest in Vietnam as well as operate in Southeast Asian countries.

In early June, Vietnam issued Decision No.667/QD-TTg approving a national strategy for foreign investment cooperation for the 2021-30 period. The strategy targets to increase the share of registered foreign investment capital from Asia, Europe and the US so that the capital placed by them represents more than 70% of the total disbursed in Vietnam by 2025 and 75% by 2030.

Besides top investors such as Singapore, the Republic of Korea, Japan, mainland China and Taiwan, the strategy also aims to boost investment from EU partners, the UK and Russia.

Vietnam is now actively positioning itself to attract “green FDI” and pursuing growth being aligned with global sustainability and climate change goals. The country is driving the economy towards green growth, sustainability and lower greenhouse gas emissions through the National Green Growth Strategy 2021-30.

According to chairman of the British Chamber of Commerce Vietnam Kenneth Atkinson, Vietnam’s commitment to higher international standards, such as international labour standards and sustainability, will also help to attract high-quality British investors, especially those committed to the UN’s Social Development Goals in their supply chain.

“However, opportunities are not without their challenges and the regulatory environment and business administration in particular still leave room for improvement. Whilst central Government seems well aware of this, there are still disconnects at a local and provincial level, which cause considerable delays in areas such as licensing and often a lack of transparency in other administrative areas,” Atkinson said./.

Efforts to bring the corporate bond market to the "rails"