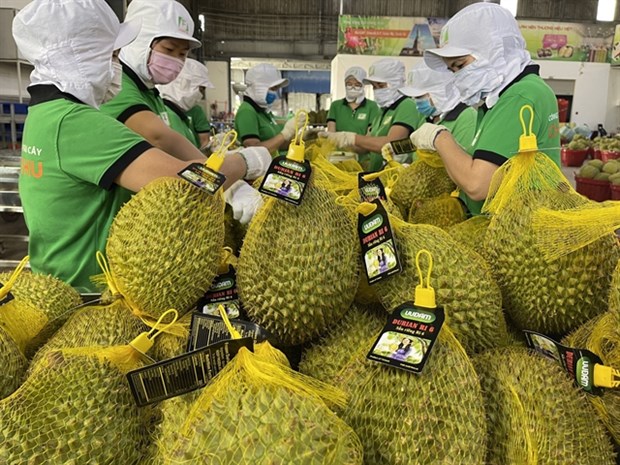 Workers wrap up and label durians. Vietnamese durians have made a name for themselves as a great-tasting fruit in many countries, but that's only the story's beginning. (Photo: baomoi.com)

Dang Phuc Nguyen, General Secretary of the Vietnam Fruits and Vegetables Association, revealed that China, the largest importer of fresh Vietnamese durians, has allowed the fruits to be imported via official channels from July 12.

However, these opportunities come with obstacles as the Chinese General Administration of Customs (CGAC) requires that Vietnamese exporting firms and growing areas register with the Vietnamese Ministry of Agriculture and Rural Development (MARD), and the registrations must be sent to CGAC for approval before the fruit can enter the country.

"Durians from unregistered firms or unregistered growing areas will not be allowed to cross the border," he said.

He also notes that registered growing areas must have quality management and a traceability system, meet Good Agricultural Practice standards and strictly comply with sanitary requirements to be eligible for approval.

Regarding other demanding markets such as the US and the EU, the general secretary said those markets insisted on Global GAP compliance and a strict chemical residue threshold for Vietnamese durian. Durians who do not tick all the boxes risk being rejected.

As Vietnamese durian easily entered the country between 2017 and 2020, some Vietnamese exporters took the market for granted and became less strict on quality control.

In 2021, after several batches with excessive pesticide residues were detected, Japan increased the frequency of inspection of Vietnamese durian, making it more difficult for the fruit to reach Japanese consumers.

"Three cases of Vietnamese durian violating safety standards were detected in 2021, of which one was related to fresh durians and two to frozen," he said.

The trade counsellor recommends firms keep a close watch on quality control and strictly comply with safety standards to ensure no pesticide residues in durians. These measures will allow the fruit to gain ground in the Japanese market.

Nguyen Phu Hoa, Deputy Consul General in Sydney (Australia), underscored Australia as a high-end durian market. Accordingly, for Vietnamese firms, it would make more sense to compete on quality rather than price.

He also calls for a national trademark for Vietnamese durians to add more value to the fruit and ensure the sustainability of its exports.

"The Vietnam Trade Office in Australia will support Vietnamese firms in media promotion to strengthen their presence in the country. Australia is a potential durian importer," he added.

Ngo Tuong Vy, General Director of the Chanh Thu Import-Export JSC., asserted that it is tough to gain entry into foreign markets and tougher to cause changes to consumer eating habits in favour of Vietnamese durians.

She also remarks that China's low standards on fruit were a thing of the past. The country has set the bar relatively high, and Vietnamese firms have no choice but to adapt to the shifting trade pattern.

He suggests four rules Vietnamese firms should follow to boost durian trade with the country.

First, Vietnamese durians must meet all the standards set out by Chinese trade authorities. Second, the fruit must reach a maturity rate of 80% upon harvesting.

Third, the fruits must be almost identical weight-wise and quality-wise. Fourth, logistics and refrigeration systems must come up to scratch.

At the conference on China's higher bar on Vietnamese fruits recently, Deputy Director of the MARD's Agro Processing and Market Development Authority Le Thanh Hoa said that many markets were tightening up on Vietnamese fruits with stricter food safety and phytosanitation standards.

He said Vietnamese fruit must adapt to their new rules and regulations or otherwise commercially lose ground in those markets.

Vu Duc Con, Deputy Director of Dak Lak province's Department of Agriculture and Rural Development, revealed that the department had granted 77 agricultural codes to a total growing area of 1,600 ha so far.

Regarding durians, the department had established 24 packaging facilities and 38 growing areas and had sent the list to CGAC for approval. /.

The two Government leaders noted with satisfaction the progress in Party and State relations over recent times, especially amid complicated international and regional developments, including COVID-19 pandemic.

The guards from the Thanh Thuỷ International Border Gate in Hà Giang and the Tianbao checkpoint in Yunnan’s Malipo county patrolled the border from Marker 261/2 to Marker 260+500.

Qualified durians need to be each weigh three kilos and meet stringent safety standards. They are required to have traceability stamps as well, which will be presented in English and show the name of the packaging facility.