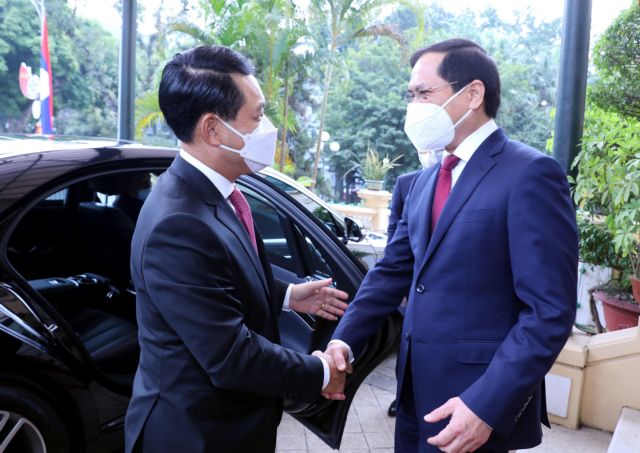 The two sides are pleased to note that the great friendship and special solidarity between the two countries in recent times have continued to flourish on all fronts, despite the COVID-19 pandemic.

The political trust between the two parties and countries continued to be enhanced with many delegation exchanges and high-level contacts, especially the official visit to Laos by Vietnamese President Nguyễn Xuân Phúc in August this year and the official visit to Việt Nam by the President of the Lao National Assembly Saysomphone Phomvihane in early December, which strengthened the already solid foundations of bilateral ties.

Security and defence cooperation was also on the rise, contributing to the maintenance of security and stability for each country.

Economic cooperation between Việt Nam and Laos continued on a positive trajectory, with two-way trade in the first 11 months of the year reaching over US$1.2 billion, up 33.6 per cent compared to the same period in 2020.

The two foreign ministers also recalled the valuable support they have provided each other concerning their COVID-19 responses.

The two sides are constantly working to improve the quality and effectiveness of cooperation in education, training and human resource development, as well as raising awareness among the young generation about the two countries history, as well as their great relationship, special solidarity and comprehensive cooperation.

The two ministers agreed to continue to closely coordinate to celebrate the Year of Solidarity and Friendship between Việt Nam and Laos in 2022.

Ministers Sơn and Saleumxay highly value the increasing cooperation between the two foreign ministries based on the Cooperation Agreement for the 2021-25 period, as well as annual cooperation mechanisms and other forms of exchange between different units under the two ministries.

The departments of international law and treaties under the two countries’ foreign ministries reviewed existing agreements and worked to facilitate the completion of internal procedures for several signed treaties, as well as pushing ahead with the signing of new treaties, to further consolidate relations between the two countries.

The two foreign ministers also informed each other of their respective countries’ foreign policies, and at the same time shared their views and in-depth assessments on regional and international issues of mutual concern, including the strategic environment in the Asia-Pacific, cooperation in ASEAN and sub-regional development.

The two sides emphasised the observance of international law and upholding the central role of ASEAN in regional structures, and agreed to continue working closely with each other at regional and international forums, including the maintenance of ASEAN’s principled position on the South China Sea issue; proactively sharing information, exchanging views and coordinating perspectives in all channels and levels to contribute to enhancing the international position of each country.

Lao foreign minister Saleumxay Kommasith asserted that Laos will support Việt Nam’s candidacy for the UN Human Rights Council for the 2023-25 term, and that Laos will continue to cooperate with Việt Nam in Mekong sub-regional cooperation mechanisms such as Cambodia-Laos-Việt Nam (CLV), Cambodia-Laos-Myanmar-Việt Nam (CLMV), and the Ayeyawady-Chao Phraya-Mekong Economic Cooperation Strategy.

Also within the framework of his official visit to Việt Nam on Wednesday, Lao foreign minister Saleumxay Kommasithm, together with his Vietnamese counterpart, will co-chair a conference to review the "one-stop shop" model at the Lao Bảo – Densavan international border gate.

The same day, the Lao diplomat, along with Vietnamese Deputy Minister of Foreign Affairs and Chairman of the National Border Committee Nguyễn Minh Vũ, will also co-chair the 31st meeting of the Việt Nam-Laos border delegation. — VNS