Declaration for peaceful and prosperous ASEAN adopted at ADMM+

Defence ministers of ASEAN countries and their partners on Wednesday adopted Bandar Seri Begawan Declaration towards a future-ready, peaceful and prosperous ASEAN. 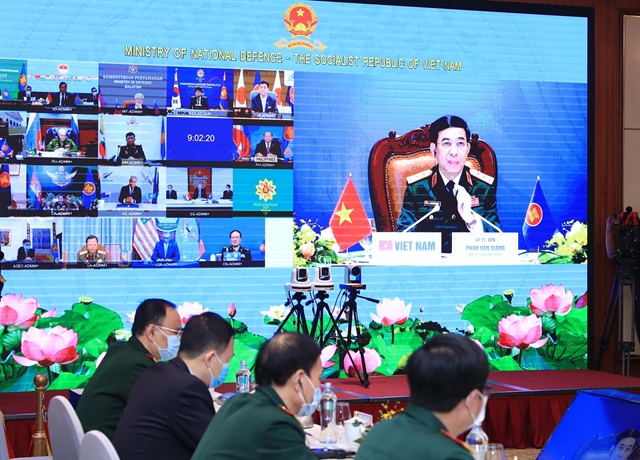 Defence ministers of ASEAN countries and their partners on Wednesday adopted the Bandar Seri Begawan Declaration towards a future-ready, peaceful and prosperous ASEAN.

The eighth ASEAN Defence Ministers’ Meeting Plus (ADMM+) convened on Wednesday via virtual conference under the host of Brunei.

Defence ministers of ASEAN nations and eight partner countries (Russia, China, US, Japan, the Republic of Korea, Australia, New Zealand and India) once again affirmed that ASEAN is the primary driving force of regional defence co-operation and partnership with its external partners, working closely with partner countries to enhance collective responsibility and promote trust.

Acknowledging unprecedented security challenges facing the region and the world as well as the implications of emerging traditional and non-traditional security threats, including the COVID-19 pandemic, the ministers vowed to continue promoting cooperation within the framework of ADMM+.

Defence agencies of ASEAN and its partners pledged to make more contribution to preventing, detecting, controlling and responding to the spread of infectious diseases, including the coronavirus.

The leaders also emphasised the importance of leveraging the capabilities of the ADMM+ Expert Group on Military Medicine, the ASEAN Military Medical Centre and the ASEAN Network of Defence Experts on Chemistry, Biology, and Radiation.

In terms of responding to maritime security challenges as well as dealing with maritime issues in the region, ADMM+ defence leaders committed to maintaining and promoting peace, security, stability, safety and freedom of navigation in and overflight above the East Sea (internationally known as South China Sea); pursuing peaceful resolution of disputes in accordance with the universally recognised principles of international law, including the 1982 United Nations Convention on the Law of the Sea (UNCLOS); exercising self-restraint in the conduct of activities and avoid actions that could complicate or escalate the situation; reaffirming the importance of upholding international law, including 1982 UNCLOS, while enhancing mutual trust and confidence;

Vietnamese Minister of Defence Phan Văn Giang strongly urged all relevant parties to "strictly abide by the principle of peacefully settling disagreements on the basis of international laws, including the (UNCLOS 1982), and finalise an effective and substantive Code of Conduct (COC) in the East Sea in accordance with international laws".

Countries must refrain from actions that increase tension and complicate the situation in any way, he said.

Minister Giang affirmed that it was more than necessary than ever to implement the Declaration on the Conduct of Parties in the East Sea (DOC) and UNCLOS 1982 and to ensure humane treatment of fishermen in the East Sea.

“By doing this, we affirm that we are defence leaders working towards peace," said Giang.

Giang said ADMM played a key role as an Asia Pacific defence-security co-operation mechanism and served as a driving force and nucleus for ADMM+ collaboration.

The defence ministers agreed to continue to organise the ADMM+ annually, showing that ASEAN is highly concerned about and appreciates co-operation of partner countries in ADMM and ADMM+ framework.

He believed that co-operation within ADMM+ framework will continue to primarily contribute to maintaining peace and stability in the region thanks to practical dialogues and cooperation, which is the principles of ADMM and ADMM+ since the early days of establishment. — VNS