The Communist Party of Vietnam has not only embraced the principles of Marxism-Leninism, but from Ho Chi Minh onward, has successfully applied it to the realities of Vietnamese society and to enhance Vietnam’s place in the world. 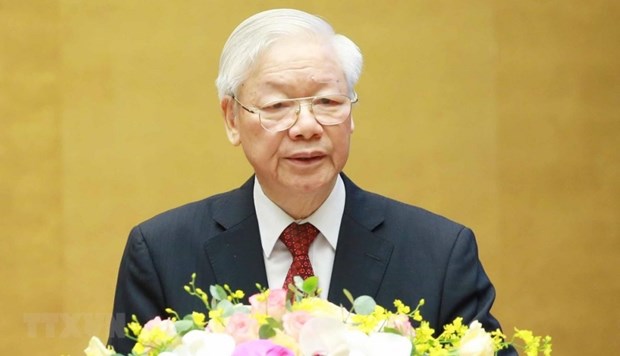 The Communist Party of Vietnam has not only embraced the principles of Marxism-Leninism, but from Ho Chi Minh onward, has successfully applied it to the realities of Vietnamese society and to enhance Vietnam’s place in the world.

This is the statement made by Kenny Coyle, member of the International Commission of the Communist Party of Britain.

According to Coyle, General Secretary of the Communist Party of Vietnam Central Committee Nguyen Phu Trong’s article entitled "A number of theoretical and practical issues on socialism and the path towards socialism in Vietnam" offers some fascinating answers to the success of Vietnam and outlines the tremendous vitality of modern Vietnam.

He said the Communist Party of Vietnam (CPV) has resisted both dogmatic approaches to Marxism, which fail to take into account ever-changing conditions, and also various anti-socialist ideologies which would trap Vietnam within a neo-colonial network.

He pointed out the process of “Doi Moi” (Renewal), with the creation of a socialist-oriented market economy, has allowed the CPV to successfully avoid stagnation and chart a new and innovative path in socialist construction. Since the initiation of the “Doi Moi” reforms in 1986, Vietnam has achieved stunning progress in raising the living standards of the Vietnamese people.

Having visited Vietnam more than six times between 2000 and 2019, Coyle said he has seen for himself the rapid modernisation of the country.

He added that the struggle of the Vietnamese people for national liberation and socialism has always been an inspiration for British communists, saying despite the devastation created by the American War, the country’s heroic people went on to build a re-united Vietnam following their victory in 1975.

He pointed to the role of the Vietnamese communists in this struggle, which enabled a small country dominated by foreign colonialism and imperialism, and destroyed by war, to manage not only to survive against all the odds but to enter a period of stability and prosperity.

Coyle concluded that the CPV’s theoretical and practical contributions to the building of socialism should be studied by all those interested in the further development of Marxism, the stages of socialist transition, and the renewed opportunities for socialism worldwide./.