The banking industry may have a hard time reaching its 2022 profit growth targets, but share valuation have dropped significantly to attractive prices. 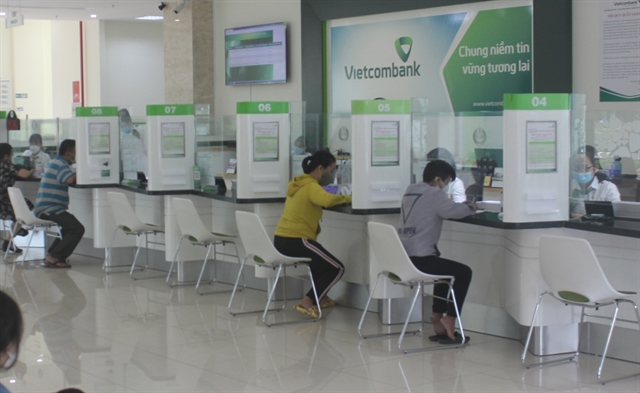 Customers at Vietcombank (VCB) branch in the Central Highlands province of Kon Tum. The total operating income of 27 listed banks in the first quarter of 2022 increased by 8.2 per cent compared to the previous quarter. VNA/VNS Photo Dư Toán

The banking industry may have a hard time reaching its 2022 profit growth targets, but share valuations have dropped significantly to attractive prices.

In the past three months, banking shares witnessed sharp declines and were among the most negatively impacted on the stock market. Most banking stocks decreased by over 30 per cent and there was no single bank seeing positive growth.

However, after a series of deep declines, many banking stocks are rebounding strongly in recent sessions. This brings hope to many investors in this industry group.

Net income from services decreased by 12.1 per cent compared to the previous quarter after increasing sharply in Q4 of 2021, but still up by 14 per cent compared to Q1 of 2021. The high quarter-on-quarter growth of the remaining activities came from other activities (+83.3 per cent), foreign exchange (+21.7 per cent), while income from securities dropped sharply (-52.7 per cent).

Non-performing loans are gradually increasing and may continue to rise in the coming quarters as banks gradually shift restructured debts to the right debt groups. FiinGroup believes that this will put pressure on some banks, especially those with low NPL coverage ratios and not enough provisioning. Meanwhile, banks that have actively made provisions with a high NPL coverage ratio will not be of concern.

In Q1 of 2022, the cost-to-income ratio fell to a low level of 30.1 per cent. However, the analyst team argued that two-thirds of the major expense items decreased quarter-on-quarter, including employee costs (-3.5 per cent) and asset spending (-34 per cent).

Regarding the business targets this year, up to 26 out of 27 listed banks set a target of 33 per cent year-on-year growth in post-tax profit. According to FiinGroup, banks will face many challenges to achieve this goal.

Net interest income is unlikely to increase strongly when interest rates are cut to support businesses and deposit rates raised to meet credit demand. The credit growth in the following quarters is difficult to maintain at the level of Q1 of 2022 due to the possibility of limited credit room. On the other hand, fee income is unlikely to grow high enough to compensate for net interest income growth.

Besides, on-balance sheet bad debt will continue to increase when the debt structure deadline expires on June 30, 2022. In addition to the banks that have made early arrangements, pressure will increase on the other banks.

Another factor to watch out for is the health of real estate businesses. According to an analysis by FiinGroup, the real estate industry is facing many obstacles, which will create additional challenges with profit growth and debt quality of banks.

However, after a strong correction period, the valuation of banking stocks became more attractive. A share's price/earnings (P/E) forecast for 2022 for the banking sector is 7.1x, 25 per cent lower than the current P/E of 9.5x. With a proportion of 30 per cent of total capitalisation and 43 per cent of total market profits, banks have a great impact on the overall P/E valuation.

Looking to 2023, tightened lending to risky areas will unevenly impact and create a pergence in profit growth in the banking industry, FiinGroup said.

In the medium and long term, the analysts maintain the view that the banking industry will transform and be an attractive investment opportunity thanks to strong digital transformation. The scale and financial capacity of the banks are being boosted thanks to accumulated profits and the capital raising process, and issuance to strategic partners. VNS

Prices of imported gasoline decrease by more than VND4 million/ton

VCN – Compared to the second half of June 2022, the average price (excluding tax) of imported gasoline decreased by about US$185/ton (equivalent to over VND 4 million/ton).

VCN - Bank-insurance cooperation (bancassurance) has always been considered one of the main drivers of banks' profits. However, improper compliance has been adversely affecting this potential field.

VCN- The draft Law on Prices (amended) has provided more specific regulations on price declaration to serve price stabilization in case of necessity as well as one of the sources of information for the price database.