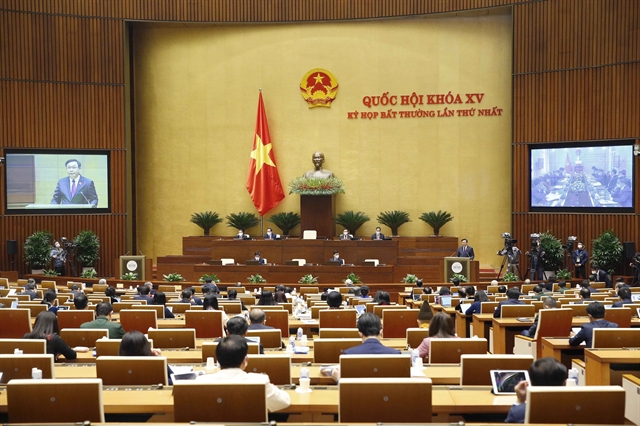 The first ever extraordinary session of the 15th NA opens on Tuesday. — VNA/VNS Photo

The 15th National Assembly convened its first ever extraordinary session in Hà Nội on Tuesday, which was connected via videoconference to 62 delegations of NA deputies in centrally-run provinces and cities, excluding the capital city's delegation who attended in-person.

Before the opening ceremony, which was televised live, leaders of the Party, State, Vietnam Fatherland Front and NA deputies paid floral tribute to President Hồ Chí Minh at his mausoleum.

In the preparatory meeting, lawmakers discussed and approved the session’s agenda after hearing feedback on the session’s scheduled agenda by NA Secretary General and Chairman of the NA Office Bùi Văn Cường.

After NA Chairman Vương Đình Huệ delivered his opening speech, Minister of Planning and Investment Nguyễn Chí Dũng presented a proposal, and Chairman of the NA Economic Committee Vũ Hồng Thanh presented a verification report on the draft resolution on fiscal and monetary policies in support of the socio-economic recovery and development programme.

Minister of Transport Nguyễn Văn Thể presented a proposal and Chairman of the NA Economic Committee Thanh presented another report examining the draft investment policy on a project to build the eastern section of the North-South expressway in 2021-2025.

Minister of Justice Lê Thành Long delivered a proposal and Chairman of the NA Economic Committee Thanh presented an examination report on the draft law on amendments and supplements to several articles of the Law on Public Investment, the Law on Public-Private Partnership, the Investment Law, the Bidding Law, the Electricity Law, the Enterprise Law, the Law on Special Consumption Tax and the Law on Enforcement of Civil Judgments.

Chairman of the NA Finance Budget Committee Nguyễn Phú Cường presented a report examining the draft resolution on piloting several special policies for the development of Cần Thơ City, after Minister of Planning and Investment Dũng presented a proposal.

In the afternoon, legislators discussed the draft resolution on fiscal and monetary policies in support of the socio-economic recovery and development programme. — VNS