Party General Secretary Nguyễn Phú Trọng expressed his delight at the rapid and comprehensive development of relations between Việt Nam and Japan during a meeting with Japanese Prime Minister (PM) Kishida Fumio on Sunday. 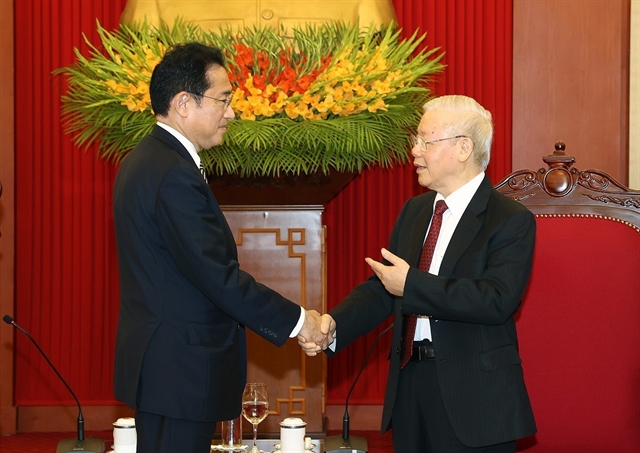 Party General Secretary Nguyễn Phú Trọng expressed his delight at the rapid and comprehensive development of relations between Việt Nam and Japan during a meeting with Japanese Prime Minister (PM) Kishida Fumio on Sunday.

Party Chief Trọng emphasises the great potential for cooperation between Việt Nam and Japan in the future, and hopes to continue the exchange, high-level meetings and relations at all levels, sectors and localities.

Further coordination is expected in international forums for the interests of both countries, for peace, friendship and cooperation in the region and the world.

He also looks forward to the joint plan to commemorate the 50th anniversary of diplomatic relations between Việt Nam and Japan in 2023, consolidating the long-term foundation to the practical and effective relations between the two countries in the future. 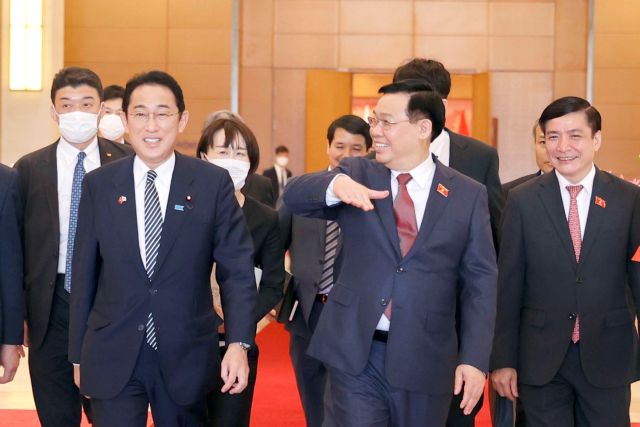 NA Chairman Huệ congratulated the prime ministers of the two countries on their successful talks, which concluded with specific solutions and the exchange of cooperation documents.

The Japanese PM said that he has more than 20 years of experience in the Japan-Việt Nam Friendship Parliamentary Alliance and therefore values the cooperation between the National Assemblies of both countries.

PM Kishida expressed his wish that NA Chair Huệ, with his rich experience in various positions, will continue his contribution to strengthening the Việt Nam-Japan relations, especially in parliamentary cooperation.

They agreed that the implementation of investment projects, especially those with Official Development Assistance (ODA), is crucial to the economic recovery to the pre-pandemic level.

She informed that during Kishida’s talks with his host Vietnamese counterpart Phạm Minh Chính, the two PMs discussed many important issues. In regards to economic cooperation, the Japanese PM laid stress on supply chain persification, digital transformation and technology development.

The PMs also discussed a number of regional and international issues and consented to closely collaborate on the development of the Mekong region, via the Japan-Mekong cooperation development fund. PM Kishida affirmed that Japan will protect the spirit and principles of the Comprehensive and Progressive Agreement for Trans-Pacific Partnership (CPTPP).

Ono added that with 2023 marking the 50th founding anniversary of Japan-Việt Nam relations and ASEAN-Japan ties, the PMs discussed ways to open up a new era for the countries on the occasion.

Responding to reporters’ queries on the significance of Kishida’s visit to bilateral relations, she said the ties are at their best ever. The 50th founding anniversary will be an important milestone for the countries and the Japanese PM’s visit serves as a stepping stone for the event next year, she said.

Mentioning the initiative on the net-zero emission community, Ono said not only the two governments will cooperate on the idea but the private sector will also join in the effort.

As for a project on helping Việt Nam improve its capacity to respond to natural disasters and climate change via earth observation satellites, she said Japan has experience in the field and wishes to share this with Việt Nam through the project.

Asked about cooperation in strategic infrastructure, the press secretary said during talks with his Vietnamese counterpart, Kishida has mentioned the completion of urban railway projects, adding that Japan will devise suitable infrastructure projects in Việt Nam in accordance with studies of the Japan International Cooperation Agency (JICA) as well as the country’s development trend. — VNS

How to speed up exports of processed foods to Japan?

VCN - In order to strongly promote the export of processed foods to the Japanese market, enterprises must pay special attention to ensuring the quality of goods. It is necessary to establish a close link channel, ensuring synchronization and smoothness in all stages from production to storage, transportation and export.