Vietnamese consumers expect a seamless banking experience when it comes to opening an account via a mobile app or website, with two in five expecting to answer 10 questions or less or they will abandon the process. One out of six Vietnamese will drop out if asked more than five questions. 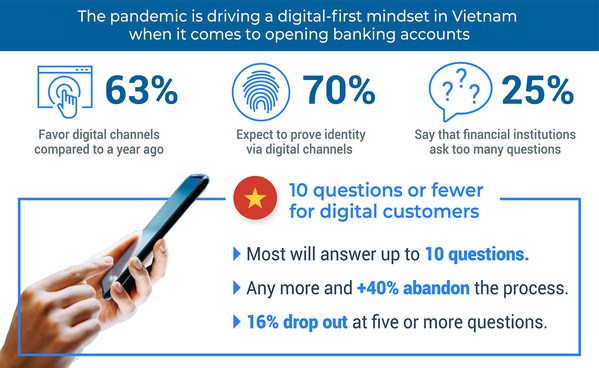 The 2021 digital banking survey found that 25 percent of Vietnamese consumers say financial institutions ask too many questions. — Infographic by FICO

Vietnamese consumers expect a seamless banking experience when it comes to opening an account via a mobile app or website, with two in five expecting to answer 10 questions or less or they will abandon the process. One out of six Vietnamese will drop out if asked more than five questions.

The figure is part of the 2021 digital banking survey conducted by the Silicon Valley-based analytics company FICO.

“The pandemic is driving a digital-first mindset in Vietnam with 63 percent of consumers more likely to open an account digitally than a year ago,” said Aashish Sharma, senior director of decision management solutions for FICO in Asia Pacific.

“The number of consumers who prefer to open bank accounts digitally has grown to 42 percent and continues to rise, which is significant in a country with a strong branch culture,” said Sharma.

The survey revealed that consumer patience with account applications varied according to product. Vietnamese consumers had the highest expectations for completing applications in 10 questions or less, for savings accounts (53 percent), transaction accounts (51 percent) and Buy Now Pay Later products (47 percent).

Interestingly this expectation was significantly higher than other countries in the survey. For instance, just 41 percent of UK consumers and 51 percent of Australian consumers expected to answer 10 questions or less when opening a transaction account.

Overall Vietnamese consumers want digital experiences that reduce friction and inconvenience. They expect their main bank to know them, 70 percent want to prove their identity online and 25 percent of Vietnamese consumers say that financial institutions ask too many questions.

The survey also showed that increased friction and security is deemed appropriate by consumers when it comes to applying and onboarding for specific high-value financial products.

Despite relatively high levels of ease and confidence in applying for day-to-day online financial products such as current accounts, savings, loans and credit cards, more than half (61 percent) of customers polled expect greater rigour when it comes to mortgage applications.

Research showed that just 31 percent of Vietnamese consumers would apply for a mortgage digitally, compared to the survey average of around one in three (34 percent). In all countries bar the USA and UK, in-branch openings are preferred to online methods. South Africa was a modest outlier with 43 percent of customers favouring online mortgage applications.

More than one in two Vietnamese respondents polled (56 percent) said they were willing to answer 11 to 20 or more questions when it came to applying online for a mortgage.

Vietnamese consumers who open an account digitally prefer to carry out the process entirely in their chosen channel, whether it is a smartphone or a website. If customers are asked to move out of the channel to prove their identities, many of them will abandon the application, either giving up on opening an account completely or by going to a competitor. Of those who don’t immediately abandon, up to an additional 20 percent will delay the process.

This survey was conducted in January 2021 by an independent research company adhering to research industry standards. 1,000 Vietnamese adults were surveyed, along with 13,000 consumers in the USA, the UK, Canada, South Africa, Australia, New Zealand, Indonesia, the Philippines, Thailand, Vietnam, Brazil, Colombia and Mexico./.

From being net sellers in the first nine months of 2022, foreign investors have become the driving force supporting the Vietnamese stock market in the last few months, and the inflows are expected to continue this year.

Chinese Ambassador to Vietnam Xiong Bo has highlighted the significance of the Lunar New Year (Tet) festival, the comprehensive strategic cooperative partnership between the two countries, and their cooperation prospects for 2023.