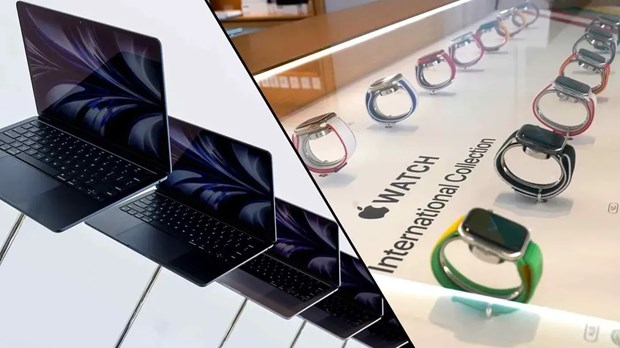 Apple is in talks to make Apple Watches and MacBooks in Vietnam for the first time as the US tech giant looks to persify production away from China, Nikkei Asia reported.

According to the newspaper, Apple suppliers Luxshare Precision Industry and Foxconn have started test production of the Apple Watch in northern Vietnam with the aim of producing the device outside of China.

Regarding the production of MacBook, Apple has asked suppliers to set up a test production line in Vietnam. However, progress in moving mass production to the country has been slow, partly due to pandemic-related disruptions.

Vietnam is already Apple's most important production hub outside of China, producing a wide range of flagship products for the American company, including iPad tablets and AirPods earphones.

According to industry experts, the Apple Watch is even more sophisticated because many components in such a small case require a high degree of technological skill. Producing the device would be a win for Vietnam as the country attempts to further upgrade its tech manufacturing sector, they said.

Apple has also continued to shift iPad production to Vietnam in an effort to persify its production. In addition, the group is also in talks with suppliers to build a trial production line for its HomePod smart speaker in Vietnam.

The number of Apple suppliers with facilities in the Southeast Asia country has increased to at least 22 from 14 in 2018, according to Nikkei Asia's analysis of Apple's latest available suppliers list. Many other major electronics manufacturers like Google, Dell and Amazon have also set up production in the country to persify beyond China, the newspaper added./.