VCN – The volume of imported automobiles remained at a high level in the first half of June.

According to the General Department of Vietnam Customs, in the first half of June (June 1 to 15), the whole country imported 7,391 CBU cars of all kinds. The total turnover is US$173.23 million.

Accordingly, cars with 9 seats or less were imported with the highest volume of 5,819 units. The total turnover is US$104.78 million.

The remaining imported vehicles are mainly trucks with 1,057 vehicles, a total turnover of US$45.37 million. The others are cars with over 9 seats and specialized vehicles.

From the beginning of the year to June 15, the whole country imported 58,222 CBU cars, with a total turnover of US$1.45 billion.

Regarding the import market (updated by the General Department of Vietnam Customs at the end of May), Thailand led the market share with 22,614 units, with a turnover of US$462.35 million; followed by Indonesia with 15,008 units, a turnover of US$210 million; then China with 8,698 units with the turnover of US$350 million.

VCN - Due to the difficult furniture export market, from the beginning of the year until now, the consumption of laminated wood has fallen into a state of stagnation and inventory. Many timber exporters have chosen to hold back, and "hibernate" through a difficult period, expecting the market to prosper. 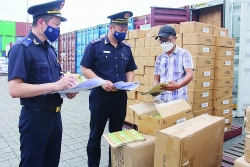