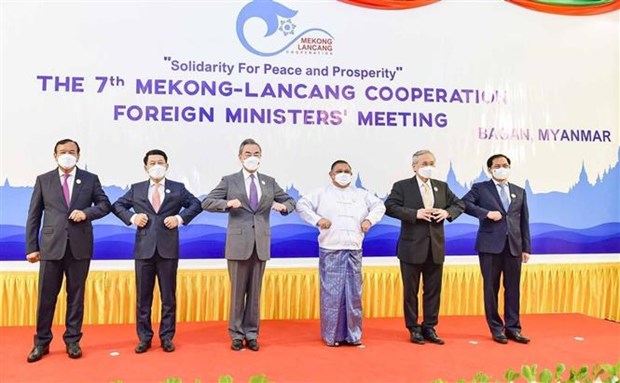 Participants lauded the MLC's contributions to regional cooperation and development, especially amid complicated developments of COVID-19.

Two-way trade between Mekong countries and China reached nearly 400 billion USD in 2021, up 23 percent over 2020, they noted, adding that many projects were completed and hundreds of technical support projects are being underway.

The ministers welcomed the outcomes of bilateral cooperation in managing Mekong River water resources as well as discussed coordination in organising the second MLC Ministerial Meeting on Water Resources in Vietnam in 2022.

They emphasised the principles of consensus, equality, mutual consultation and shared benefits, with respect for the United Nations Charter and international laws. At the same time, they agreed to promote MLC cooperation by consolidating the friendly neighbourliness, making positive contributions to socio-economic development of member countries, building the ASEAN Community, and realising the Sustainable Development Goals 2030.

He placed strong emphasis on speeding up economic recovery, enhancing the economy’s resilience, and strengthening customs cooperation and trade facilitation in order to address goods congestion and ensure the circulation of goods and services.

He proposed stronger cooperation in managing and using water resources in a sustainable manner, especially through the speeding up of the building of a MLC action plan for water resources collaboration in the 2023-2027 period.

At the same time, it is necessary to encourage the expansion of consultations and dialogues among member countries on the water resources development plan, while increasing the coordination between the MLC and the Mekong River Commission, and enhancing the people-to-people contacts through recovering and expanding tourism activities as well as cooperation among local administrations, the organisation of culture, sports and communications events, and the empowerment of women and youngsters.

Participants also discussed the preparations for the fourth MLC Summit that will be held within 2022. 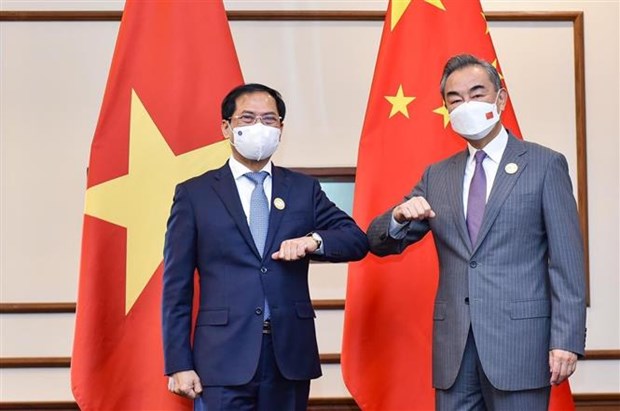 The same day, FM Son had a meeting with Chinese State Councilor and Foreign Minister Wang Yi, during which both sides highly valued the progress of the Vietnam-China relations over the years with regular high-level meetings and stably growing trade partnership.

Son affirmed that the Party and State of Vietnam always attaches great importance to the friendship and cooperation with China, and hope to promote the relations between the two Parties and countries in healthy, sustainable and long-term manner with increasing political trust and effective collaboration.

He proposed that both sides actively increase visits and meetings at all levels, and China continue to create more favourable conditions for Vietnamese products, especially farm produce and seafood, to be exported to China and to a third country through China.

For his part, Wang affirmed that the Party and State of China pay great attention to reinforcing and developing the comprehensive strategic cooperative partnership with Vietnam, and hope to work with Vietnam to strengthen mutual political trust and deepen their win-win partnership, satisfactorily settling disagreements, and making the relationship between the two Parties and countries further develop in a healthy and stable manner for the interests of both sides.

He affirmed that China is willing to coordinate with Vietnam to increase exchanges and meetings at all levels through many flexible methods. China aims to open its market for high-quality products from regional countries, especially ASEAN nations, he said, adding that China highly values the role of Vietnam in the global supply chain and hopes to work closely with the country in economy, trade and investment to ensure the stability of the global supply chain.

Regarding the East Sea issue, FM Son suggested that both sides continue to effectively implement their high-level agreements and common perspectives; respect each other's legitimate interests in line with international law, including the 1982 UN Convention on the Law of the Sea (UNCLOS); fully and effectively carry out the Declaration on the Conduct of Parties in the East Sea (DOC) towards a practical and effective Code of Conduct (COC) on the waters with conformity to international law, thus together maintaining peace and stability in the East Sea.

He affirmed that China hopes to deal with disagreements through dialogue and negotiation, and is willing to work with ASEAN to implement the DOC and soon finalise the COC for peace, stability and maritime freedom.

Both sides also discussed a number of international and regional issues of shared concern./.