The United Nations Security Council (UNSC) convened on Monday (local time)nbsp;to review the implementation of Resolution 2118, issued in 2013, over chemical weapons in Syria. 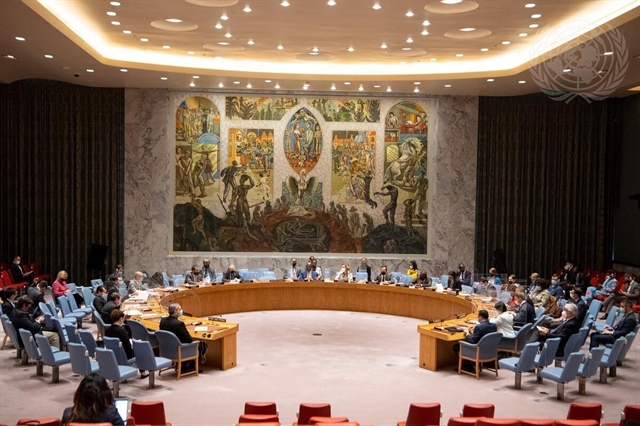 The United Nations Security Council (UNSC) convened on Monday (local time) to review the implementation of Resolution 2118, issued in 2013, over chemical weapons in Syria.

Izumi Nakamitsu, UN Under-Secretary-General and High Representative for Disarmament Affairs, briefed participants on the implementation of the Resolution, noting that most of the field activities by the Technical Secretariat of the Organisation for the Prohibition of Chemical Weapons (OPCW) were still suspended due to impacts of COVID-19.

Regarding the settlement of outstanding issues related to the initial declaration by Syria to the OPCW under the Chemical Weapons Convention (CWC), the OPCW Technical Secretariat and Syria are discussing ways to accelerate this process. The two sides are preparing for the 25th round of consultations in the latter half of October and also for a meeting between the OPCW Director-General and the Syrian Minister of Foreign Affairs and Expatriates, who is also head of the country’s national authority for the CWC.

At the session, UNSC members voiced concerns about the allegations of chemical weapon use in Syria and appealed for cooperation to be enhanced to prevent this action.

They emphasised the importance of promoting technical cooperation between the OPCW Technical Secretariat and Syria to deal with the outstanding issues towards the full implementation of obligations under the CWC and UNSC Resolution 2118.

In his remarks, Ambassador Phạm Hải Anh, Deputy Permanent Representative of Việt Nam to the UN, reiterated Việt Nam’s stance on condemning the use of chemical weapons, stressing the need for respecting and fully implementing the CWC.

He highlighted the role of technical consultations between Syria and the OPCW Technical Secretariat to quickly resolve the outstanding issues related to Syria’s initial declaration to seek a durable solution to the chemical weapon issue in line with the Resolution.

The diplomat also underlined the importance of constructive cooperation and the international community’s unanimity so as to facilitate this process.

Speaking at a meeting of the UN Security Council (UNSC) on the Haiti situation and the operation of the UN Integrated Office in Haiti (BINUH), Trà highlighted the political agreement between the Haitian Prime Minister and political parties on the organisation of the election in 2022.

The diplomat expressed her hope that relevant sides would identify priorities, focusing on the model and time of the election, saying the number of female representatives engaging in political activities should account for 30 per cent of the total.

Việt Nam suggested solutions to enforce laws and protect civilians, particularly women and children, while calling for aid to improve the capacity of the Haitian police through training, providing equipment and raising capacity management.

Trà also praised efforts by the BINUH and the UN’s working group in Haiti, and expressed her support for the extension of the BINUH’s mission.

She called on the UN, and international and regional organisations to continue helping Haiti overcome the current difficulties, and reiterated Việt Nam’s support to Haitians, for peace, security and development in the Caribbean country.

Briefing the meeting on the situation in Haiti, rapporteurs proposed the UN and international organisations increase humanitarian aid to needy people in Haiti. — VNS