Việt Nam achieved high export growth in the first five months of this year as businesses strived to promote investment in production and exports. 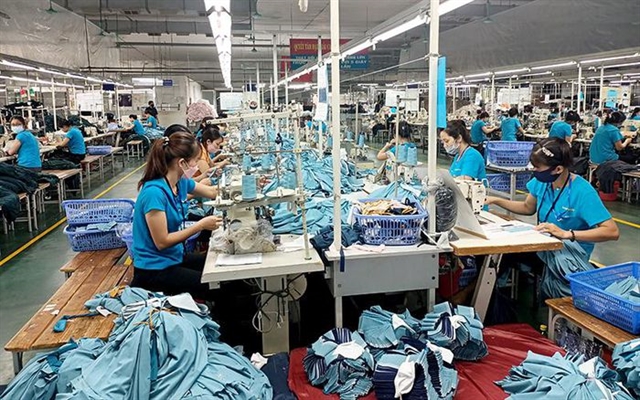 In the first five months of the year, Việt Nam's textile and garment export value reached US$18.7 billion, up 23.5 per cent. — Photo nhandan.vn

Việt Nam achieved high export growth in the first five months of this year as businesses strived to promote investment in production and exports.

In the first five months of the year, Việt Nam's textile and garment export value reached US$18.7 billion, up 23.5 per cent.

According to Nam Định Textile and Garment Corporation (Natexco), its revenue was more than VNĐ1 trillion in the first five months, 23 per cent higher than the same period last year.

At present, the corporation has orders to produce until the end of September. It is also continuing to negotiate with partners about year-end orders.

Besides that, Natexco will continue to restructure its resources for becoming a textile centre in the northern region, meeting the demands of the domestic market and exports.

Natexco deputy general Nguyễn Thị Khánh said the Textile 1 JSC had completed its factory No 2 meeting European standards, while factory No 1 reached those standards in 2017. The factories would give Textile 1 JSC an opportunity in developing its brand and promoting exports.

Deputy General Director of Việt Thắng Corporation Đậu Phi Quyết said that in the first quarter of 2022, despite many difficulties and challenges, the corporation brought in 25 per cent of the revenue plan and 35 per cent of the profit plan.

However, the conflict between Russia and Ukraine had caused instability in the world supply chain and the risk of supply disruption. Both high input cost and cost of logistics and petrol forced the textile and garment companies to find ways to adapt.

So far, the supply of raw materials and accessories of Việt Thắng had been basically stable. However, importing spare parts, equipment and supplies from Europe would take 12 to 20 weeks, higher than the 6-8 weeks before. If this situation does not improve, it would affect its production and export plans.

Meanwhile, the chairman of Việt Nam National Textile and Garment Group (Vinatex) Lê Tiến Trường, said that Vinatex gained a growth of 50 per cent in revenue during the first quarter of 2022.

However, Vinatex also faced many challenges impacting negatively on the domestic textile industry as well as the group in the first quarter, including the Russia-Ukraine conflict and a reduction in the economic growth of developed regions like the US and EU.

Vinatex general director Cao Hữu Hiếu said that it gained the results due to previous investment in preparing raw materials. In 2015-2020, Vinatex invested in a number of yarn production projects with modern technology to produce common high quality products.

For the garment industry, after the pandemic was under control, member companies quickly stabilised labour and recovered effective production.

To promote the export of textile and garment products, enterprises must continue investment in expanding production facilities and proactively supply materials and auxiliary materials to meet rules of origin and take export opportunities from new-generation free trade agreements, experts say.

In addition, market research should be promoted to develop short- and long-term strategies and goals. Risk management is also a top priority.

For free-on-board (FOB) businesses, it is necessary to carefully study the market and not sign contracts too early to avoid the risk of low prices not keeping up with the increase in input material prices.

FOB service suppliers help their clients in almost every stage of the manufacturing process. They arrange to source materials, carry out inbound logistics, cut the garments, make products, and do packaging and carry out outbound logistics. VNS