Việt Nam, Malaysia agree to boost cooperation in all fields 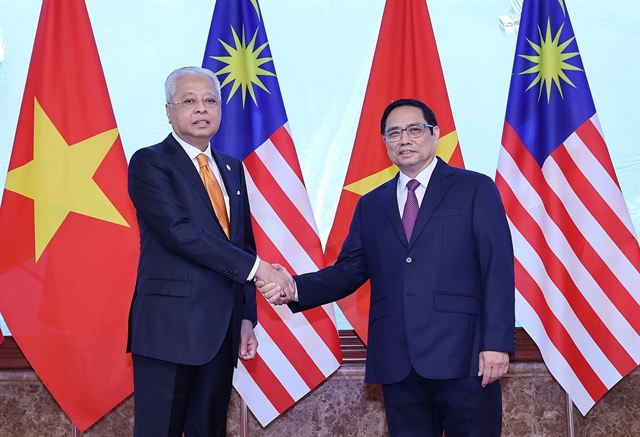 They held talks right after a welcome ceremony for the Malaysian leader at the Presidential Palace. This is the Malaysian PM's first tour to Việt Nam since he took office in August 2021.

The two leaders agreed to increase exchanges of delegations at all levels; effectively promote bilateral cooperation mechanisms; effectively carry out the action plan during the 2021-25 period implementing the Việt Nam-Malaysia strategic partnership; expand people-to-people exchanges and prepare to organise activities to celebrate the 50th anniversary of the establishment of the diplomatic ties between the two countries in 2023.

Assessing cooperation in economy, trade and investment as a highlight in the bilateral relations, the two PMs affirmed that there remain many potentials for the two countries to exploit and develop; and agreed to soon increase the two-way trade turnover to US$18 billion or higher by 2025, increase trade exchanges and cooperation for products that are strengths of both countries such as agricultural and fisheries products, food industry and electronic components, and study an initiative to build a mechanism on information exchanges in the field of trade defence between the two countries.

They also discussed measures to promote bilateral cooperation in other important fields such as food security, labour, education, science and technology, culture, sports and tourism.

The two sides applauded the agreement reached by two countries on mutual recognition of vaccine certificates, creating conditions for people-to-people exchanges between the two countries, particularly when Việt Nam has reopened for tourism from March 15 and Malaysia plans to reopen tourism from April 1.

At the talks, PM Chính affirmed that the visit to Việt Nam by the Malaysian PM has special meaning, creating a motivation to strengthen and promote the Việt Nam-Malaysia cooperation, particularly as the strategic partnership between the two countries has gone the first seven years and the two sides prepare to celebrate the 50th anniversary of the diplomatic ties.

Malaysian PM Dato’ Sri Ismail Sabri bin Yaakob praised the achievements of Việt Nam over the past years and spoke highly of the role of the Party and State of Việt Nam in leading the country to safely adapt and effectively control the COVID-19 pandemic while boosting socio-economic recovery and development.

He affirmed that Malaysia always puts a high priority on enhancing relations with Việt Nam – its sole strategic partnership in the Southeast Asian region.

The two PMs discussed regional and international issues of common concern. They agreed to coordinate to build a united ASEAN in handling emerging issues in the region.