nbsp;Ambassador Đặng Hoàng Giang, Permanent Representative of Việt Nanbsp;to the UN, and his counterparts of South Africa, Sweden, and New Zealand co-chaired a consultation on a UN General Assembly (UNGA) draft resolution on the epidemic preparedness and response. 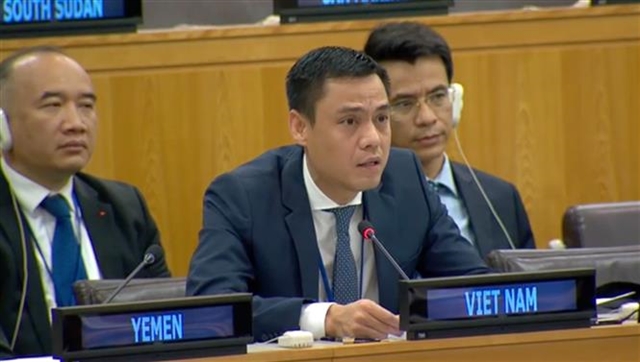 Ambassador Đặng Hoàng Giang, Permanent Representative of Việt Nam to the UN, and his counterparts of South Africa, Sweden, and New Zealand co-chaired a consultation on a UN General Assembly (UNGA) draft resolution on epidemic preparedness and response.

Giang said the COVID-19 pandemic had revealed the global healthcare system’s shortcomings in epidemic preparedness and response, left a heavy socio-economic impact, slowed down or reversed implementation of the 2030 Agenda for Sustainable Development, and affected the health of many people, especially vulnerable groups.

As chair of the drafting of UNGA Resolution 75/27, dated on the International Day of Epidemic Preparedness (December 27), Việt Nam has been working actively with other countries to promote talks on measures for effectively improving the global healthcare system and to increase the sharing of lessons from the pandemic and good practices, thereby helping improve awareness and action plan for future epidemics, according to the diplomat.

At the consultation, many countries shared the need to boost awareness and action to stay ready to cope with epidemics around the globe. They also affirmed continued participation in and contribution to this process.

It was set up as recommended by the Independent Panel for Pandemic Preparedness and Response, and established by the WHO Director-General, to review lessons in the COVID-19 response to better prepare for future pandemics. — VNS