The UK – Vietnam Free Trade Agreement (UKFTA) was providing significant opportunities for Vietnam to expand the export of steel and iron products in the UK. 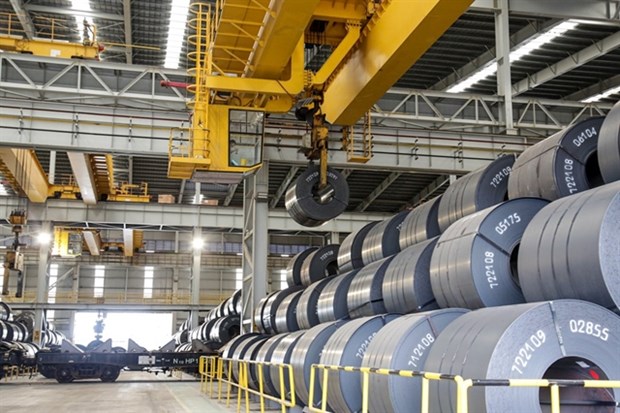 Steel and iron exports to the UK increased rapidly since the UK – Vietnam Free Trade Agreement came into force on May 1, 2021. (Photo: VNA)

The UK – Vietnam Free Trade Agreement (UKFTA) was providing significant opportunities for Vietnam to expand the export of steel and iron products in the UK.

The deal also enhances cooperation with the UK in accelerating the decarbonisation process of the iron and steel industry as Vietnam was striving to achieve net zero by 2050.

Statistics of the Ministry of Industry and Trade showed that steel and iron exports of Vietnam to the UK increased by 1,269% in 2021 over the previous year, one among the fastest growing exports to the UK besides vegetables (82%), pepper (49%), rattan products (56%) and ceramics (32%).

Customs statistics showed that the export of iron and steel products to the UK totalled nearly 419,000 tonnes in 2021, worth more than 491 million USD, compared to the volume of just 51,851 tonnes and the export value of 35.88 million USD recorded in 2020.

The UK Department for International Trade revealed that iron and steel was one among the top five goods imported to the UK from Vietnam in the four quarters to the end of the first quarter of 2022 with a revenue of 336.8 million GBP (390 million USD) or 7.2% of all UK goods imported from Vietnam.

According to the Vietnam Steel Association, steel and iron products of Vietnam were mainly exported to ASEAN, the US and China while the export to the UK remained modest. The UK imports of iron and steel totalled 7.33 billion USD in 2021, statistics of the United Nations Comtrade database on international trade showed.

Thus, there was still significant room to promote the exportation of steel and iron products to the UK, especially if steel makers could grab the opportunities arising from the UKVFTA, the association said.

The association pointed out that the steel industry of Vietnam had been witnessing a dramatic change in the structure of export markets since 2021, with exports to major markets like ASEAN and China seeing drops while exports to the US, EU and the UK increased rapidly.

Impressive increases in steel and iron exports to the US, the EU and the UK contributed to allowing steel to enter the club of goods with export turnover of 10 billion USD or higher last year. Steel exports hit the milestone of 10.8 billion USD in November 2021 and became the product with the fastest growth rate in export, up 129.8% over the same period last year.

Although steel exports slumped from the beginning of this year on weak global demand, the UK and the EU which had free trade deals with Vietnam, remain spotlight markets.

The latest updates from the General Department of Customs showed that the UK imported nearly 83,500 tonnes of steel and iron, worth 116.4 million USD in the first seven months of this year. Steel exports to the EU were estimated at 1.1 million tonnes, up 18.1% in the period.

According to Vietnam Steel Association, in the context of increasing protectionism, persifying export markets is vital for the domestic steel industry, in which, the free trade deals like the UKVFTA are providing significant opportunities to expand exports.

However, it is necessary for Vietnamese steel makers to improve technology and renovate production and business methods to be able to expand exports in the UK and the EU which had high requirements for product quality, the association said.

The Ministry of Industry and Trade in a report to the Government about the proposal to develop a strategy for the steel industry to 2030 with a vision to 2050 pointed out that the competitiveness of the steel industry remains low with heavy dependence on imported materials, together with small production capacity, outdated equipment and technology which are causing energy waste and posing risks to the environment.

The ministry proposed policies be raised to build a strong steel industry which is important to promote the country’s development toward industrialisation and modernisation, including policies to encourage renovations in steel production technology.

Green steel, or the manufacturing of steel without the use of fossil fuels, is becoming a trend in the world as the net zero target by 2050 is putting the steel industry under pressure to act.

The steel industry was one of the biggest CO2 emitters. Wordsteel's statistics showed that today, worldwide, on average 1.85 tonnes of CO2 are emitted for every tonne of steel.

Vietnam should consider moving toward green steel to increase exports sustainably and reduce impacts on the environment if the country is to meet the net zero carbon emissions target by 2050, the steel association said.

Cuong from the Vietnam’s Embassy to the UK stressed that Vietnam could enhance cooperation with the UK in promoting the decarbonisation of the steel industry./.

In the first nine months of 2022, Vietnam was the third largest seafood supplier for the US in terms of volume and the 5th largest in value, data from the US National Marine Fisheries Service showed.