A new study has confirmed the important roles and significant contributions of female deputies to the National Assembly and People’s Councils during the 2016-2021 term, and called on voters to select competent and qualified candidates, regardless of their gender. 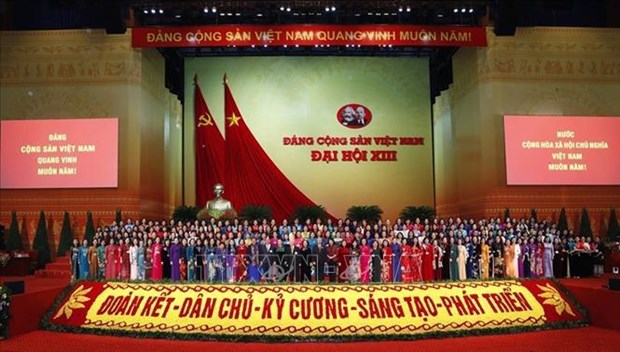 Party and State leaders pose for a group photo with women representatives at the 13th National Party Congress. (Source: VNA)

A new study has confirmed the important roles and significant contributions of female deputies to the National Assembly and People’s Councils during the 2016-2021 term, and called on voters to select competent and qualified candidates, regardless of their gender.

The study’s findings were shared and discussed on May 19 at a virtual thematic discussion, jointly convened by the University of Social Sciences and Humanities (USSH - Vietnam National University in Hanoi), the United Nations Development Programme (UNDP) in Vietnam, and other partners.

The study was funded by the Australian Government’s Department for Foreign Affairs and Trade (DFAT), the Irish Embassy and UNDP in Vietnam, through the Provincial Governance and Public Administration Performance Index (PAPI) research framework.

It provides empirical evidence of how female deputies of the NA and provincial People’s Councils have contributed to the socio-economical and political development of the country over the past five years.

The study was conducted with 248 deputies to the 14th NA (or 50 percent) and 136 provincial People’s Council deputies of Hanoi, Binh Phuoc province and Can Tho city.

Based on qualitative and quantitative research data, the research suggests policy responses and actions to promote gender equity in people-elected bodies in Vietnam during the 2021-2026 period and towards 2030.

During the 2016-2021 term, the NA had its first female chairperson and female delegates accounted for 26.8 percent. Women took up 26.7 percent of seats in the provincial People’s Councils during this term, as a result of the 2016 elections.

The study, “Roles, Performance and Contributions of Vietnamese Women Representatives During the 2016-2021 Period”, shows that given that their areas of focuses and strengths are different, both male and female elected representatives noted that the interest of voters in their constituencies is the most important factor influencing their views of a specific issue.

Women deputies more frequently engage with voters via social networking applications than men representatives. Both of them were confident that they had promptly responded to voters’ proposals and petitions. They noted that their top strength was in performing the legislative mandate. In the meantime, interviewed provincial People’s Council deputies, men and women alike, considered that oversight performance is the top strength.

In terms of values, both surveyed men and women representatives from the National Assembly and provincial People’s Councils valued the merits of ‘listening’, ‘having personal viewpoints’ and ‘having the ability to persuade others’. Women representatives tend to value the merit of ‘having the ability to persuade others’ than their men counterparts.

“Women’s leadership in public sector is an important issue as it is essential to have women’s perspectives and voices involved in the decision-making process. Public policies should fully capture the perspectives of both men and women to ensure equity and fairness,” reiterated Elisa Cavacece, Deputy Head of Mission, the Embassy of Ireland upon the study findings.

In addition, it suggests that elected women and men deputies participate in all fields by introducing gender quotes for all NA and all People’s Councils committees./.

VCN – Speaking at the seminar “Role of woman in trade facilitation” held by Customs News in coordination with the US Agency for International Development (USAID) on March 23, Deputy Director General of Vietnam Customs Nguyen Van Tho highly appreciated the role of female officers of Vietnam Customs in trade facilitation as well as in the building and development of Vietnam’s Customs sector.

Prime Minister Pham Minh Chinh chaired an online conference with representatives from State-owned enterprises (SOEs) on March 24, which focused on ways to mobilise more resources from SOEs for the country’s socio-economic development.

The chance to arrange and rearrange the development of the country

VCN - According to Minister of Planning and Investment Nguyen Chi Dung, building a national master plan is an opportunity to arrange and rearrange the development of the country to achieve the goals and aspirations that the Resolution of the 13th National Congress of the Communist Party determined that, by 2045, Vietnam will become a developed, high-income country.