Provinces in the southern region plan to expand industrial parks (IPs) and continue improving the business climate to lure foreign investment following the containment of the third COVID-19 outbreak. 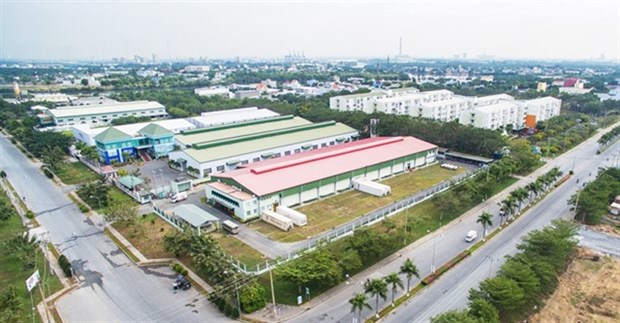 Long Hau Industrial Park in Long An province. Long An and other southern provinces plan to expand or build new industrial parks to welcome a new wave of foreign investment. (Photo courtesy of the industrial park)


Provinces in the southern region plan to expand industrial parks (IPs) and continue improving the business climate to lure foreign investment following the containment of the third COVID-19 outbreak.

Tran Tue Hien, chairwoman of the Binh Phuoc Province People’s Committee, said it has sought approval from the Government to expand three IPs with an additional area of 2,500ha.

It aims to attract 6,000 new businesses, especially in processing, agriculture and supporting industry, over the next five years, she said.

Despite the pandemic, Binh Phuoc last year attracted 120 domestic projects with registered capital of 12 trillion VND (522 million USD), up 17 percent year-on-year, and 36 foreign-invested projects worth 432 million USD, or 96 percent of the figure in 2019.

To date, the province has more than 270 foreign-invested projects with registered capital of 2.7 billion USD.

Long An will also expand the second phase of Long Hau IP (90ha) and the third phase of Xuyen A IP (177ha).

It ps an area of 128.8ha, of which 92.39ha are industrial land with ready-built factories and warehouses.

The port system will be developed to welcome cargo ships with a capacity of 20,000DWT in the future.

In addition, the Government has recently allowed Dong Nai province to convert 6,500ha of farm land to new IPs and expansion of existing IPs to address a shortage of space.

Six localities in the province such as Long Thanh, Cam My, Thong Nhat, and Trang Bom, and Nhon Trach districts and Long Khanh city plan to build more IPs, each between 200ha and 900ha.

Dong Nai will also expand existing IPs as they are all nearly full. Thirty-five of them have received approval from the Government, though only 31 are in operation and one more is under construction, with a total area of over 10,000ha.

To date, 1,700 companies have invested in Dong Nai, including more than 1,200 foreign firms from 43 countries and territories. The province wants to develop logistics, construction, healthcare and housing.

Nguyen Van Toan, vice president of the Vietnam Association of Foreign Invested Enterprises, said a good legal framework and reasonable incentives for investors were needed to lure the investment./.

Over the past 30 years, industrial parks (IP) and economic zones (EZ) across the country have attracted over 100 billion USD of investment, and created jobs for more than 4 million labourers, according to the Ministry of Planning and Investment (MPI).

Many new regulations in the industrial park management policy

VCN - Many regulations related to the management of industrial zones (IZs) and economic zones (EZs) are being amended and supplemented in Decree 35/2022/ND-CP regulating the management of IZs and Ezs (referred to as Decree 35), which will take effect from July 15, 2022. Customs News spoke with Nguyen Van Be, Chairman of the Business Association in Industrial Park in HCM City, about the innovation policies in Decree 35.

The IIP in May also surged 4 per cent month-on-month and 10.4 per cent year-on-year, the GSO said, adding that the processing and manufacturing industry saw a yearly IIP rise of 12 per cent.