Freighters have even started accepting small orders at low prices in the hope they may be able to pool them together to make a trip worthwhile.

After skyrocketing to a historic level during the pandemic, sea transport prices have steadily gone down to almost pre-pandemic level with a large number of containers available as freighters making generous offers to exporters.

Đặng Đình Long, CEO of Logistics Mega A, a logistics and warehouse solutions company in Việt Nam, said traditionally, this time of the year would be high-season for freighters and exporters alike with Vietnamese firms looking to deliver their goods to international markets.

This year, however, has seen demand plummet in most major markets even with Christmas and New Year approaching due to consumers being forced to cut spending and inflation. This has translated in fewer orders of goods, sending freighters into a scramble to find exporters.

Freighters have even started accepting small orders at low prices in the hope they may be able to pool them together to make a trip worthwhile, Long said. Typically, freighters do not accept orders with fewer than 2,000-3,000 containers but now they have been signing those with less than 800.

"We must stay open for business. Even small orders now are a good thing as we can save on storage cost for all those empty containers lying at the ports," he said.

According to a report by the General Department of Vietnam Customs, Việt Nam's export in the month of September decreased significantly, bringing sea transport costs to a new low. Particularly, the shipping cost to the EU has dropped as low as $900, a 50 per cent decrease from the beginning of the year.

"This has been a reflection of the global economy heading for a recession. Consumers in international markets were increasingly made to choose more affordable, instead of luxury high-quality import goods," he said.

In addition, slow sales resulted in a high inventory level and fewer new orders from retailers, especially for high-end commodities. That's not to say everyone was affected equally, he said, exporters of basic commodities should be doing quite well as demand for their goods largely remained unchanged while shipping costs went down.

Phan Minh Thông, chairman of Phúc Sinh JSC., a Vietnamese food exporter company, said his company's shipping cost has gone down to the pre-pandemic level after shooting up almost tenfold during the pandemic.

"We have been spending around VNĐ4 billion on shipping per month. It [reduction in shipping cost] has been a tremendous help for the company compared to during the pandemic," he said.

Shipping, however, is only a factor in an exporter's input cost.

"For us, it makes little difference. A large part of our input cost comes from importing raw materials. As the US dollar continued to appreciate, our bottom line has benefited very little," said Anh.

Coupled with lower demand in both domestic and international markets, rubber and plastic producers have seen sales dropping from 20-40 per cent compared to the beginning of 2022.

Anh said the gloomy picture is likely here to stay, at least until the end of the second quarter of next year.

"The next 8-9 months will prove crucial for us. A significant drop in orders, increased pressure on cash flow and financial liabilities will put everyone to the test," he added.

Anh said for the time being, the top priority is to maintain production, even at minimum, to sustain the labour force and be ready for when the market recovers.

To attract international container shipping companies, the Maritime Administration of Quang Ninh has held that administrative procedure reforms should be stepped up to further facilitate their operation in this northern province.

Growing ‘stars in the midst of difficulties

VCN - The Covid-19 pandemic has pushed a series of businesses into unprecedented difficulties, of which many have had to leave the market. However, in contrast, other industries and businesses can successfully reverse the flow thanks to unexpected advantages created in the context of the pandemic. In the midst of this difficulty, many records of profits were set.

VCN - In the context of good growth, many enterprises have implemented plans to buy or rent ships to improve their operational capacity, rejuvenate their fleet, and anticipate the recovery of the shipping market after the pandemic. 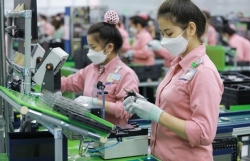