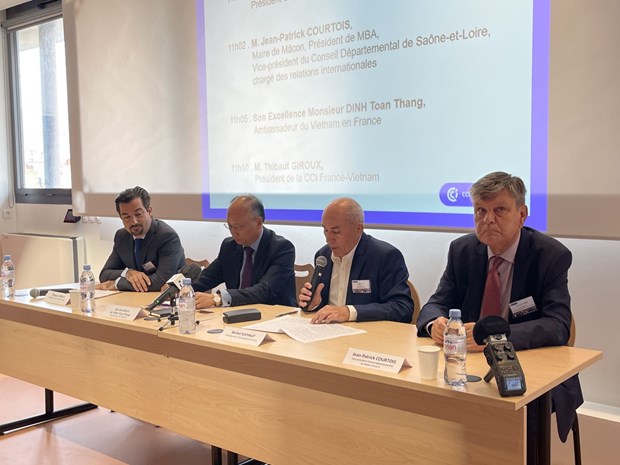 The event was jointly held by the Chamber of Commerce and Industry (CCI) of Saône-et-Loire province, and the Vietnamese Embassy in France.

Addressing the event, Chairman of the CCI of Saône-et-Loire province Michel Suchaut said Vietnam is undergoing economic, industrial and social changes. Its consumption growth, along with the emergence of a middle class which is expected to account for about 50 percent of the country’s population by 2035, will create an increasingly strong demand for transport infrastructure, energy, environment and logistics. 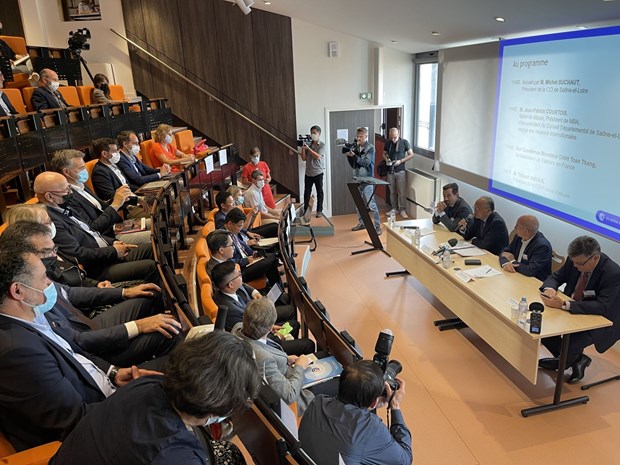 Participants at the seminar (Photo: VNA)

For those reasons, Vietnam is a potential market for French importers and exporters, and businesses in general, and for those in Saône-et-Loire province in particular, he said.

For his part, Ambassador Dinh Toan Thang highlighted the potential and opportunities for foreign investment and international trade activities in Vietnam.

Along with the EVFTA, the EU-Vietnam Investment Protection Agreement (EVIPA), once officially approved, will create a framework for stable and long-term economic - trade - investment cooperation, and ensure the implementation of trade liberalization commitments between Vietnam and the EU in general, and France in particular, thus creating an impetus for strengthening and deepening the strategic partnership between the two countries, he said.

Participants were updated on the investment and trade development environment in Vietnam, potential and opportunities that EVFTA brings to French companies, as well as regulations and issues that businesses need to pay attention to when promoting trade and investment activities in Vietnam.

Thibaut Giroux, President of the French Chamber of Commerce and Industry in Vietnam (CCI France-Vietnam) pointed out the areas that Vietnam needs and also the strength of France, including food, wine, industrial products, machinery, healthcare, technology, energy, and banking.

He affirmed that Vietnam is an attractive market for foreign investors, adding that developing trade and investment relations with Vietnam also means expanding trade with Southeast Asia, a dynamic market that accounts for 10 percent of the world's population.

France is now the third largest EU investor in Vietnam with a total registered capital of more than 3.6 billion USD, mainly in the field of industry, manufacturing and processing, and waste treatment and real estate.

It was the fifth biggest importer of Vietnam in the EU in 2020, with Vietnam’s total export turnover to the country hitting nearly 5.38 billion EUR (over 6.3 billion USD)./.