The Vietnam Association of Seafood Exporters and Producers (VASEP) and the World Bank (WB) in Vietnam on August 10 released “A Trade-Based Analysis of the Economic Impact of Non-Compliance with Illegal, Unreported and Unregulated Fishing: The Case of Vietnam”. 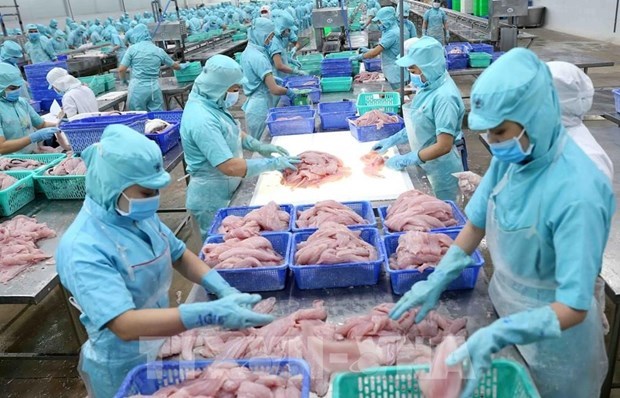 The Vietnam Association of Seafood Exporters and Producers (VASEP) and the World Bank (WB) in Vietnam on August 10 released “A Trade-Based Analysis of the Economic Impact of Non-Compliance with Illegal, Unreported and Unregulated Fishing: The Case of Vietnam”.

Speaking at the webinar to release the report, VASEP Vice President Nguyen Thi Thu Sac said that seafood is Vietnam's fifth biggest export product in terms of value, accounting for about 4 percent of the country’s export turnover. Vietnam's seafood exports in recent years have been valued at from 8.5 billion USD to nearly 9 billion USD per year.

As the third largest seafood exporter in the world, in recent years, Vietnam has focused on sustainable development of the seafood industry. However, with the characteristics of small-scale fisheries, Vietnam is facing a big challenge related to the illegal, unreported and unregulated (IUU) fishing yellow card warning issued by the European Commission (EC) since October 2017.

The yellow card has caused Vietnam's seafood exports to the EU market to decline continuously from 2017 until now. From 2017-2019, its seafood export turnover to the markets of the European Union decreased by 12 percent, equivalent to 183.5 million USD.

Since 2019, the EU has dropped from the 2nd position to the 4th position among Vietnam’s seafood export markets, after the US, Japan and China.

Mona Sur, the WB’s Practice Manager for Environment, Natural Resources and Blue Economy for East Asia and the Pacific, stated that in order to have detailed assessments of these risks, VASEP collaborated with experts from Nha Trang University and Copenhagen Business University (Denmark) to implement the analysis, under the supervision of the World Bank.

Experts warn that if Vietnam has to receive a red card from the EC, the most immediate and direct impact on Vietnamese seafood will be the EC's trade ban. At that time, it is estimated that Vietnam's seafood industry will lose about 480 million USD each year if it loses the EU market.

If Vietnam soon has the yellow card removed, and takes advantage of tariff preferences and changes of institutions from the EVFTA, the opportunity to recover and increase seafood exports to the EU market to 1.2-1.4 billion USD in the coming years is feasible.

This shows that it is necessary to have reasonable and effective solutions to make the EC soon remove the yellow card, and achieve 7-9 percent in seafood exports and 16-18 billion USD in total export turnover by 2030./.

Prime Minister Pham Minh Chinh will attend the 38th and 39th ASEAN Summits and related summits via video conference on October 26 – 28 at the invitation of the Sultan of Brunei Darussalam – Chair of ASEAN 2021.

Vietnam has temporarily recognised vaccination certificates and vaccine passports by 72 countries and territories in line with the Government’s Resolution No.128/NQ-CP on safe and flexible adaptation to and effective control of COVID-19 pandemic, said Foreign Ministry spokeswoman Le Thi Thu Hang.

VCN - The 7th ASEAN Ministerial Meeting on Drug Matters (AMMD) took place on October 14 via video conference under the chair of Cambodia with the participation of ASEAN members.