Prime Minister Nguyen Xuan Phuc on March 22 had a meeting with generations of officials of the Ho Chi Minh Communist Youth Union (HCYU) on the occasion of the union’s 90th founding anniversary (March 26, 1931 – 2021). 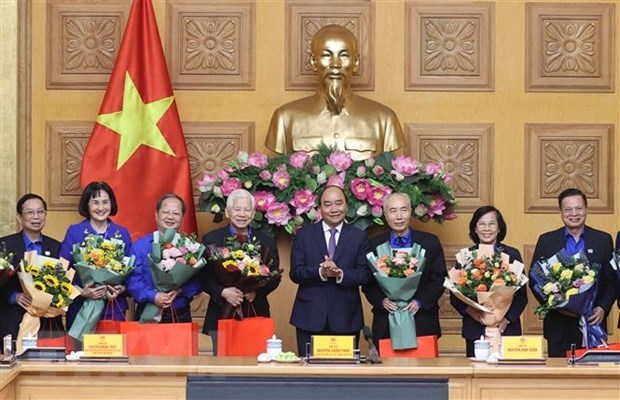 Prime Minister Nguyen Xuan Phuc on March 22 had a meeting with generations of officials of the Ho Chi Minh Communist Youth Union (HCYU) on the occasion of the union’s 90th founding anniversary (March 26, 1931 – 2021).

Expressing their delight at the nation’s development, incumbent and former officials of the union said they support the Party’s and State’s policies and orientations, particularly in building Vietnam into a strong and prosperous country in 2045.

They hoped young people nationwide will continue making contributions to such progress.

Highlighting his gratitude to former HCYU officials, of whom many were soldiers making significant contributions to Vietnam’s revolution for independence and national construction cause, PM Phuc said the Party and State always attach importance to the role and position of the youth.

They are the vanguard force of the revolution and are placed at the centre of the nation’s human resources development strategy, the Government leader said, adding that the Vietnamese government in different periods issued many policies to ensure the youth’s rights and legitimate interests, he added.

To realise the Party’s Resolution on youth-related affairs, he asked the union to further taking care of its members and young people, particularly in personal training and career building.

Each member of the HCYU should prepare to defence themselves in the 4th industrial revolution and from the dark side of the market economy, he noted, saying the youth must take the lead on the forefront of innovation, creativity and start-up.

He recommended the union come up with new ways to attract the participation in youth movements and strengthen education on revolutionary ideology, morality and lifestyle among young people, especially in remote areas.

The PM stressed that the entire political system must pay attention to the HCYU and affairs related to young people./.

First Secretary of the Communist Party of Cuba (CPC) Central Committee and President of Cuba Miguel Díaz Canel chaired an official welcome ceremony for President Nguyen Xuan Phuc and the Vietnamese delegation at the Palace of the Revolution in Havana on September 19 evening (local time).